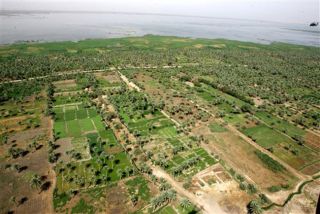 New discoveries at dig sites in Middle Asia are rocking the archeological world and redefining the origins of modern civilization.

Numerous sites in modern-day Iran and the surrounding region suggest that a vast network of societies together constituted the first cities, whose residents traded goods across hundreds of miles and forged parallel but strikingly independent cultures.

Archaeologists have thought that modern civilization began in Mesopotamia, where the large Tigris and Euphrates rivers bounded a fertile valley that nurtured an increasingly complex society.

The social structures, wealth and technologies of this society slowly spread along the Nile and then the Indus rivers in the 3rd millennium B.C.

The findings at the new sites may have shaken conventional ancient history to its very foundations, reporter Andrew Lawler told LiveScience.

"People didn't think you could have large settlements this early without large rivers emptying into an ocean. No one knew of these sites," said Lawler, who reported in the Aug. 3 issue of Science magazine on the key findings, which were discussed at a recent archaeological conference in Ravenna, Italy.

One site proved particularly important for convincing some scientists of the error of the accepted history. Locals had been digging up artifacts in an ancient cemetery just south of Jiroft and flooding the art market with pottery and other goods. Researchers tracked these curiously unique pieces back to their source, where, Lawler said, they found "a vast moonscape of craters made by looters."

But further exploration of two nearby mounds found evidence of a large city, one that may have rivaled contemporary Ur in Mesopotamia. "These people were trading with the Indus, with Mesopotamia, to the north and south," Lawler said.

According to Carl Lamberg-Karlovsky of Harvard University, the site dates back to 4000 B.C., signifying that the Jiroft site and its environs were once home to a long-lived culture, not a brief response to Mesopotamian wealth.

The entire area of interest spreads roughly from the eastern border of Iran to the Pakistani-Iranian border, and from the Russian steppes southward through the Persian Gulf area and onto the Arabian Peninsula.

Over a period of centuries in the mid- to late-3rd millennium B.C., a cultural awakening occurred in many cities in this area, evidenced by the elite's showcasing of valued materials gathered across large distances and fashioned by artists.

"People throughout this area highly valued lapis lazuli, which came from the mines of Afghanistan, copper from Pakistan, silver and gold," Lawler said. "They traded to get these raw materials which artisans then worked into their own particular style."

Lawler added that these differences in style testify to the individuality of each society, comparable to the city-states of ancient Greece. In neither case were the settlements mere satellite colonies of a larger city.

"They were in communication, but creating their own vibrant cultures," Lawler said, "developing their own pottery styles, art, and possibly their own writing system."

The potential discovery of a new writing system was perhaps the largest controversy of the many discussed at the conference. Three tablets, the first discovered by a local farmer and the others subsequently unearthed by professional archaeologists, appear to contain a unique iconography.

However, the young site will see much more excavation in coming years, and further discoveries there could justify what for many is the precious new jewel in a crown of archaeological achievements in Middle Asia.