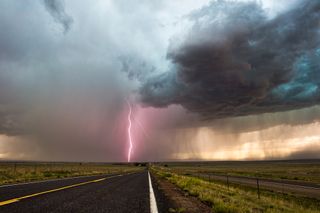 It's not uncommon for people to blame achy joints on the weather, but two new studies from Australia suggest that changes in air pressure or rainy days are not the culprits for your aches and pains.

In the studies, both of which were conducted by researchers at The George Institute for Global Health at the University of Sydney in Australia, the scientists compared people's reports of pain to weather data from the Australian Bureau of Meteorology.

The researchers found there were no links between the weather and people's reports of low back pain in one study, or knee arthritis in the other. [5 Surprising Facts About Pain]

The first study, published in December 2016 in the journal Pain Medicine, included nearly 1,000 adults with low back pain. Over a four-year period, the researchers gathered data from doctors across Sydney who saw patients who reported having back pain during the past few days, but who also said they had been pain-free for at least one month before their pain started. The researchers compared weather data from the week that each person's pain began to weather data from one month earlier, when the patient had been pain-free.

They found no links between a number of weather parameters, including precipitation, air pressure, wind speed and humidity, and people's back pain.

In the second study, published in December 2016 in the journal Osteoarthritis and Cartilage, the researchers looked at data from nearly 350 people who had arthritis of the knee. At the start of the study, the participants reported how severe their knee pain was on a scale of 1 to 10, when it was at its mildest. Then, every 10 days over the course of the three-month study period, they reported their level of pain on the same scale. In addition, the participants were asked to report any particularly severe pain if it occurred at any point during the study period. The researchers considered any increase of 2 or more points on the pain scale to be a pain flare-up.

But when the researchers compared the flare-ups to meteorological data, they found no link between weather and pain.

Both studies reinforce earlier research from the same institution, which found in a 2014 study that low back pain was not linked to changes in the weather. That study received widespread criticism on social media, the researchers said in a statement released alongside their new findings.

"People were adamant that adverse weather conditions worsened their symptoms, so we decided to go ahead with a new study based on data from new patients with lower back pain and osteoarthritis," Chris Maher, the director of the musculoskeletal division at The George Institute for Global Health and a co-author of the back pain study, said in the statement.

"The results were almost exactly the same: There is absolutely no link between pain and the weather in these conditions," Maher said.

People's beliefs that the two are linked may be due to their preconceived notions, he said. "The belief that pain and inclement weather are linked dates back to Roman times," he said. "But our research suggests this belief may be based on the fact that people recall events that confirm their pre-existing views."

Not all experts agree with the studies' failure to find a link between weather and joint pain, however.

"Despite these studies, it is not possible to say that there is no link, especially given how much people report that for them there is a strong link" said Dr. Robert Shmerling, the clinical chief of the division of rheumatology at Beth Israel Deaconess Medical Center in Boston.

"It is nearly impossible to 'prove a negative' — there is always a possibility that a particular weather feature does affect a particular type of arthritis in a particular set of people — but so far we haven't figured out if that's the case," Shmerling told Live Science.

Indeed, previous studies on the connection have been inconsistent, Shmerling noted. "A number of studies have looked at this question and many have found no connection," while some have found correlations between a variety of weather factors, such as barometric pressure or changes in humidity, "but overall there has been no consistent pattern," he said.

For patients who are convinced there's a link between the weather and their pain, however, the new findings are unlikely to persuade them otherwise, Shmerling said.

Ultimately, "when it comes to weather, there is little practical advice to give" to patients, Shmerling said, adding that he cannot write a prescription for someone to move to a climate where the patient thinks he or she will feel better.

"What I routinely tell my patients is this: If you feel there is a link, you are not alone, many others are convinced as well, but we haven't been able to figure out how it works or what to do about it," he said.