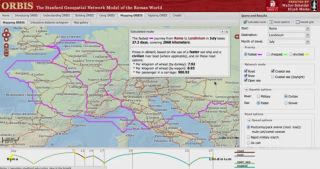 ORBIS shows what would have been the fastest route between Rome and modern-day London during the time of the Roman Empire.
(Image: © Orbis)

A new online tool, made by a team of historians and information technology specialists at Stanford University, shows just how long and costly it was to send people and wheat between cities in the Roman Empire. "It's Google Maps for the ancient world, complete with the 'Avoid Highways' feature," Scott Weingart, a doctoral student in library sciences at the University of Indiana, wrote in a blog-post review. Weingart was not involved in creating the tool, called ORBIS, but its creators asked him to preview and comment on it. His review appeared May 4 in the Editor's Choice column in Digital Humanities Now.

A paper map can show how far two cities are from one another, but in a world of sailing ships and donkey trains, the shortest route wasn't necessarily the one people would use. ORBIS shows likely routes based on conditions 2,000 years ago. The ORBIS team used ancient maps and records, modern-day weather measurements and modern-day historians' experiments with trying to sail in Roman-style ships to inform their calculations.

ORBIS helps historians see how the Roman Empire was shaped by the time and cost of moving people and goods between cities, according to the ORBIS website. Cities on the edges of the empire were very expensive to ship to, for example, even if they weren't necessarily that far away. Here at InnovationNewsDaily, we imagined researchers might use the tool to figure out whether two cities traded often, or to check if someone spotted in one city in January could have made it to another city by March.

The interface is a little like adjusting travel in the old kids' computer game Oregon Trail. Users select two cities and what month to embark. Then they can click to see the fastest, cheapest or shortest routes between the two cities and compare them.

The results also show how much it would have cost to travel or to ship a kilogram of wheat that distance, at that time of year. For example, the fastest possible July trip between Rome and Londinium – or modern-day London – would have taken 27 days. (The same trip now takes less than three hours by plane). It would have cost a merchant 7.92 denarii, a late Roman currency, to send a kilogram of wheat by donkey that distance. For a person to travel the route, he would have to pay 900.93 denarii.

Users can make infinite adjustments, looking for the cheapest passenger route, for example, or for a route entirely on land. They can choose at what speed they'll travel, specifying whether they want to go at a "rapid military march," on an "ox cart" or in a "camel caravan."

As in Oregon Trail, making those adjustments and seeing the outcomes gives users a glimpse of what it was like to live in ancient times.

"This tool is an exemplar of a shift in digital humanities projects," Weingart wrote, citing how easy it is to download the data that goes into ORBIS' calculations and to see the equations ORBIS' creators used. He admonishes the group for not publishing their computer code, too.

Historians may want to hold off on using ORBIS until it undergoes formal peer-review and gets published in a journal, Weingart wrote, but he predicted it would be popular once polished.