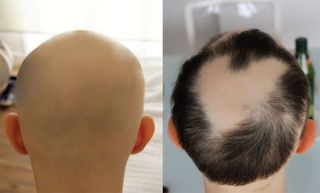 An image of a patient with alopecia universalis, a condition that results in hair loss. On the left, the patient's head before treatment with the drug tofacitinib. On the right, the head after treatment.
(Image: © Annals of Internal Medicine)

Two patients, who each lost all of their hair 10 years ago due to a medical condition, recently regrew some of their hair after taking an arthritis drug, according to a new report of the cases.

The patients, one man and one woman, suffered from alopecia universalis, a condition in which people lose all of the hair on their entire body because their immune system attacks hair follicles. There is currently no effective treatment for the condition. The patients' doctors tried treating them with multiple other drugs, but nothing worked.

However, after the patients took the arthritis drug, called tofacitinib, every day for two months, some hair regrew on their scalp, eyebrows and under the arms, according to the report. The patients were followed for nine months while they took the drug, and they did not experience any serious side effects, the researchers said.

The researchers said in their study that they hope that these cases will prompt a study to determine whether tofacitinib is a safe and effective treatment for alopecia universalis. "Successful treatment can improve patients' lives dramatically, as it did for our patients," the researchers, from Albert Einstein Hospital in Sao Paulo, Brazil, wrote in the Nov. 15 issue of the journal Annals of Internal Medicine. [4 Common Skin Woes, and How to Fix Them]

Although the hair-loss condition is not life-threatening, it is important to develop effective treatments because the condition can have a negative effect on a patient's mental health. "Hair loss really affects your self-esteem," said Dr. Doris Day, a dermatologist at Lenox Hill Hospital, in New York, who was not involved with the study. "I have patients who are near suicidal because of hair loss," Day said.

But there is concern that long-term treatment with tofacitinib could cause harmful side effects, the researchers said. The drug is known to cause side effects that include an increased risk of serious infections as well as tears in the stomach and intestines, according to Pfizer, the company that makes tofacitinib, which is sold under the brand name Xeljanz.

The findings add to those of a study published in September, which tested tofacitinib as a treatment for 66 people with hair loss due to alopecia areata, an immune-system condition in which the hair falls out in patches. (Alopecia universalis is the most advanced form of alopecia areata.) In that study, half of the people regrew some hair, and one-third saw more than 50 percent of the hair on their scalp grow back. However, that study lasted only three months.

Currently, it's not clear exactly why people with alopecia universalis lose the ability to grow hair. But by studying how tofacitinib works to reverse hair loss, researchers may better understand the condition itself and be able to develop new treatments with fewer side effects, Day said.

"The more we understand about the different pathways, about what makes hair grow and what makes hair not grow, we can come up with better, more refined treatments that are hopefully safer and more reliably effective," Day said.