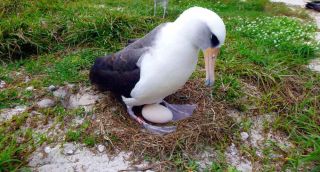 Forget about the stork — it's the albatross that should be in charge of baby delivery. That's because the world's oldest wild breeding bird mother, a 66-year-old albatross named Wisdom, is incubating another egg, likely her 41st one, experts say.

Wisdom's new chick is unexpected; many albatrosses don't breed for two consecutive years, and Wisdom had a chick last year. Rather, most lay an egg one year and then take a break the next, instead investing their time and energy into molting their feathers, said researchers at the Midway Atoll National Wildlife Refuge and Battle of Midway National Memorial, located about 1,400 miles (2,250 kilometers) northwest of Hawaii.

Having healthy feathers is important because albatrosses spend almost 90 percent of their time flying, often covering thousands of miles as they search for food in the north Pacific Ocean, the researchers said. [Adorable Photos of Baby Shorebirds]

For whatever reason, Wisdom chose to lay an egg this year. The last time researchers saw the famous mom, she was sitting on her egg, waiting for the return of her mate, Akeakamai (a Hawaiian word that means "a love of wisdom, scholar"). Albatrosses often tag-team, with one parent incubating the egg while the other goes out to sea to hunt for food.

Every year, the duo returns to the wildlife refuge at Midway Atoll, an albatross hotspot.

Kristina McOmber, the refuge's biology program volunteer crew leader, discovered the expecting bird on Dec. 3. McOmber spotted Wisdom thanks to the bird's bright-red leg band placed there by scientists. Akeakamai was seen by the nest on Nov. 23, refuge volunteers said.

"I find it impressive that not only has Wisdom returned for over six decades as the oldest living, breeding bird in the wild, but also that biologists here on Midway have been keeping records that have allowed us to keep track of her over the years," Charlie Pelizza, the U.S. Fish and Wildlife Service's acting project leader for Midway Atoll Refuge and Memorial, said in a statement. "The staff was abuzz with the news that Wisdom was back and incubating. It's amazing what a bit of good news can do to brighten the day."

Biologist Chandler Robbins first banded Wisdom in 1956. Robbins, who is now 98, has kept abreast of Wisdom's travels over the years — an estimated 3 million miles (5 million km) in her lifetime — and heralded in the nine chicks she's laid since 2006, including Kūkini, who hatched in February 2016.

Wisdom may be a celebrity, but she's not a prima donna. Instead, she shares the National Wildlife Refuge with about 70 percent of the world's Laysan albatross (Phoebastria immutabilis) population, and almost 40 percent of the world's black-footed albatrosses (Phoebastria nigripes). The short-tailed albatross (Phoebastria albatrus), which the International Union for Conservation of Nature classifies as a vulnerable species, also occasionally nests on the Sand and Eastern islands within the refuge.

The birds typically arrive at the refuge in late October, and they number in the hundreds of thousands by the end of November, the biologists said.