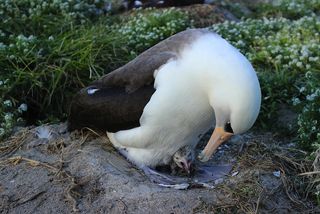 The 63-year-old Laysan albatross named Wisdom was spotted taking care of her newborn earlier this month on the Midway Atoll National Wildlife Refuge, according to the U.S. Fish and Wildlife Service.

Biologists banded Wisdom in 1956 as she incubated an egg and have been following her ever since. The tough old bird has hatched a new chick for the past seven years in a row and has likely raised more than 30 chicks in her lifetime. She also survived a 2011 tsunami, which claimed 2,000 of her fellow adult albatrosses and about 110,000 chicks in the Midway wildlife refuge, an island habitat in the middle of the North Pacific.

"Her ability to continue to hatch chicks during the last half century is beyond impressive despite the threats that albatross face at sea," refuge biologist Pete Leary said in a statement. For example, flying fish eggs are a key part of the albatross diet, but flying fish sometimes attach their eggs to bits of discarded plastic floating at sea, Leary explained.

Though the sea-faring albatross (Phoebastria immutabilis) lays only one egg a year, mothers spend much of their year incubating and raising their chick, according to FWS officials.