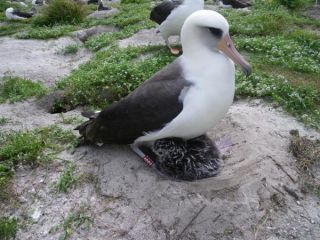 No quit in this one. She's a new mother once again, seen above with her chick.
(Image: © John Klavitter/ USFWS.)

An albatross more than 60 years old the oldest known wild bird in the United States survived the tsunami that struck its Pacific Island home after the major earthquake in Japan.

The bird, a Laysan albatross called Wisdom by wildlife biologists, recently became a mother once again. Both the mother and her newly hatched chick were spotted alive about a week after the tsunami generated by Japan's 9.0 magnitude earthquake struck Sand Island, one of the islands that make up Midway Atoll, Reuters reported. [See the damage caused to Midway .]

The Midway Atoll National Wildlife Refuge in the North Pacific Ocean is famous for its Laysan albatross population. Midway lies near the northwestern end of the Hawaiian Islands, about a third of the way between Honolulu and Tokyo. The atoll is an unincorporated territory of the United States.

Midway was struck by 5-foot (1.5-meter) waves after the quake struck. The tsunami killed an estimated 2,000 adult albatrosses and about 110,000 chicks in the wildlife refuge.

"It's a dangerous world out there, there's lots going on, so I would say she's very lucky," Barry Stieglitz, project leader for the Hawaiian and Pacific Islands National Wildlife Refuge Complex of the Fish and Wildlife Service, told Reuters.

Wisdom was first banded in 1956 as she incubated an egg, and she was estimated to be at least 5 years old then. U.S. Fish and Wildlife officials estimate that Wisdom has likely raised at least 30 to 35 chicks during her breeding life, though the number may well be higher because experienced parents tend to be better parents than younger breeders.

Laysan albatrosses (Phoebastria immutabilis) spend half the year at sea and return to land only to breed, according to the National Audubon Society.