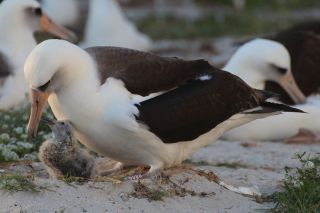 The world's oldest known wild bird just added a new chick to the family — her 40th one, experts say.

The Laysan albatross (Phoebastria immutabilis), named Wisdom, is at least 65 years old but shows no signs of slowing down. Wildlife officials at the Midway Atoll National Wildlife Refuge in Hawaii saw her lay an egg on Nov. 28, 2015, and incubate it for several weeks.

A fuzzy, gray chick cracked out of its shell on Feb. 1. But Wisdom wasn't there when the baby chick hatched: She had headed out to sea on Jan. 20, leaving her mate on nest duty. She returned just after Super Bowl Sunday (Feb. 7) with a full belly and settled down on the nest, allowing her mate to fly off to sea in search of food, officials said. [Photos of the World's Largest Flying Bird]

Wildlife officials wasted no time in naming the chick, dubbing it Kūkini, which means "messenger" in Hawaiian.

"Wisdom is an iconic symbol of inspiration and hope," refuge manager Robert Peyton said in a statement. "From a scientific perspective, albatrosses are a critical indicator species for the world's oceans that sustain millions of human beings as well."

When researchers first tagged Wisdom in 1956, she was already a breeding adult. The iconic bird has raised at least eight chicks since 2006, and even survived the 2011 tsunami in Japan.

"She is breaking longevity records of previously banded birds by at least a decade," Peyton said. "With over a million albatross on Midway Atoll alone, this shows just how much is left to learn about the natural world around us."

Since her banding on Midway Atoll, Wisdom has likely flown more than 3 million miles (4.8 million kilometers) around the Pacific.

"That is up to six trips from the Earth to the moon and back again," said Bruce Peterjohn, chief of the Patuxent Wildlife Research Center's National Bird Banding Laboratory. "What is also miraculous is that biologist Chandler Robbins, who banded her as a breeding adult in 1956 on Midway Atoll, sighted her 46 years later near the same nesting location."

These days, Robbins is 97, and still occasionally comes to work to check on the birds. However, Wisdom and Kūkini aren't the only birds he follows.

There are about 470,000 albatross nests on the entire atoll, and each nest represents two adults, bringing the total breeding population to 940,000. These birds arrive at Midway in late November to lay eggs, search for a mate, rest or practice their mating dance skills, wildlife experts said.