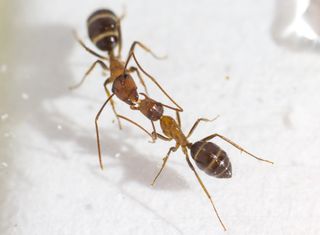 Talk about intimate communication. Researchers have found that ants pass along chemical signals with their nest mates by sharing saliva.

The oral fluid of the Florida carpenter ant (Camponotus floridanus) contains chemicals that might help homogenize the scent of ants in the colony and even impact the growth of their larvae, researchers reported in a study published Nov. 29 in the journal eLife.

Previously, ants were thought to engage in the saliva-swapping, or "trophallaxis," mainly as a way to share food, study researcher Richard Benton, of the Center for Integrative Genomics at the University of Lausanne in Switzerland, said in a statement.

"But trophallaxis occurs in other contexts, such as when an ant is reunited with a nest-mate after isolation," Benton said. "We therefore wanted to see if the fluid exchanged by trophallaxis contains molecules that allow ants to pass other chemical messages to each other, and not just food." [See Photos of Crazy Ants in Florida]

To answer that question, the researchers had to find a way to collect ant spit. This was no easy task. Instances of trophallaxis happen quickly and are impossible to predict, making a wait-and-see approach impossible, the researchers wrote in eLife. First, the team attempted to prompt trophallaxis by feeding an ant sugar solution and temporarily isolating it from its friends, a condition that did prompt more ants to share spit. But that method was still low-yield, and was prone to potential confounding variables, the researchers wrote: The ant oral fluid might be altered by the sugar feeding or by the effects of isolation.

So the team came up with another approach. They anesthetized ants temporarily with carbon dioxide and then squeezed them gently to squirt out a bit of spit. They compared this fluid to the small amounts of saliva they'd collected by the sucrose method and to the ant gut contents and circulatory fluid to be sure that what they were collecting was the same oral fluid swapped during trophallaxis.

Once they knew they had the right stuff, the researchers used mass spectrometry, a method that measures the mass of molecules inside a sample, in order to identify the components of the fluid. They found far more than food — the ant spit contained dozens of proteins, 64 microRNAs (small segments of the molecule that helps translate genetic instructions into proteins and other building blocks of the body) and long-chain hydrocarbons that may help install a colony's signature scent on individual ants, an important signal for identification and social interactions. The study couldn't yet prove, however, that trophallaxis directly influences the ants' scents or immunology.

Many of the proteins in the oral fluid are digestion-related, but at least 10 are involved in the regulation of growth and development, the researchers reported. Among these proteins were ones that make up juvenile hormone, a chemical important for insect development and behavior. Further analysis revealed that juvenile hormone was present in the ant oral fluid. [Photos: 15 Insects and Spiders That May Share Your Home]

This is important because trophallaxis is how ant nurses feed developing larvae; the presence of the growth hormone in their spittle might play a role in larval development. To test that idea, the researchers selected some adult ants and fed them either food supplemented with juvenile hormone or with an inert substance. The ants were each given five to 10 larvae to raise. Those nurse ants supplemented with juvenile hormone raised larvae that were larger in adulthood than the larvae raised by the control group. They were also twice as likely as the control larvae to successfully complete metamorphosis to develop into adults.

"When the ants feed their larvae, they aren't just feeding them food, they are casting quantitative ballots for their colony, administering different amounts of growth-promoting components to influence the next generation," study author Adria LeBoeuf, also of the University of Lausanne's Center for Integrative Genomics, said in the statement.

"Our findings suggest that trophallaxis underlies a private communication channel that ants use to direct the development of their young, similar to milk in mammals," LeBoeuf said.