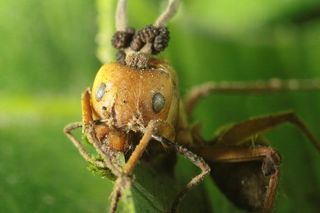 A parasitic fungus known to manipulate the brains of ants doesn't make slavelike "zombies" out of any old host.

Instead, the microorganism is somehow able to recognize the brains of different ant species, and releases its mind-controlling chemical cocktail only when in its preferred host, new research shows.

"Behavioral manipulation is such a complex [characteristic] that it only occurs when there's a very close coevolution between pathogen and host," said Charissa de Bekker, a molecular biologist at Pennsylvania State University and lead author of the new study, published in August in the journal BMC Evolutionary Biology.

"The theory is that every species of ant has its own species of fungi that it gets infected by," de Bekker told Live Science. [Mind Control: See Images of Zombie Ants]

Fungi of the genus Ophiocordyceps — so-called zombie ant fungi — need ants to complete their life cycle. When an ant comes across fungal spores while foraging, the fungus infects the insect and quickly spreads throughout its body.

Fungal cells in the ant's head release chemicals that hijack the insect's central nervous system. The fungus forces the ant to climb up vegetation and clamp down onto a leaf or twig before killing its hapless drone. It then grows a spore-releasing stalk out of the back of the victim's head to infect more ants on the ground below.

De Bekker and her colleagues wondered why different Ophiocordycepsspecies seem to infect only certain ants. "It could be for so many reasons," she said. "Maybe the ants have different life cycles. Or maybe they never encounter the spores."

To find out if Ophiocordyceps can zombify many ant species, the researchers focused on a fungal species known as Ophiocordyceps unilateralis sensu lato (a temporary designation until it's properly named). Discovered in 2009 by citizen scientist Kim Fleming in South Carolina, the fungus makes zombie ants out of two carpenter ant species, Camponotus castaneus and Camponotus americanus.

The team injected fungal material (in a liquid medium) into the two ant species, as well as Camponotus pennsylvanicus and Formica dolosa, which aren't known to be hosts to the fungus despite living in the same areas as the other ants. They also ran control experiments, in which ants were either left alone or injected with a fungus-free liquid.

The fungus killed all three of the Camponotus species, pulling its mind-control trick only on these two known hosts, the researchers found. (F. dolosa didn't survive long after any injection treatment.)

Next, de Bekker and her colleagues wanted to see if the fungus secretes a specific array of chemicals that allows it to manipulate the behavior of C. castaneus and C. americanus, but not other ants.

"We took the four species of ants that we used for the injection study, dissected their brains and kept [the brains] alive by putting them in an insect cell culture medium," de Bekker said. "We added the fungus to this medium and let it react to the environment, and then we extracted the medium, which had all of the molecules the fungus produced."

Interestingly, the fungus produced a different chemical cocktail for each ant species, suggesting it "knows" the brains of its target hosts and reacts accordingly, de Bekker said. The fungus didn't coevolve with C. pennsylvanicus or F. dolosa, so it's unable to produce the right cocktail to manipulate them.

"There's probably going to be the whole mixture of chemicals that has to be there in the right amounts, working together to manipulate the ants' behaviors," de Bekker said.