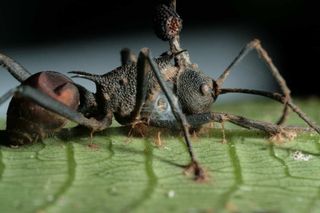 The mature, fruiting body of a zombie fungus is growing through this zombie ant's neck. The poor ant also has damage from a chewing insect; and a spider is making a home beneath its corpse.
(Image: © David Hughes, Penn State University)

A fungus that invades the brains of ants, turning them into zombies on a death march, may have met its match. Another parasitic fungus, it turns out, effectively castrates the zombie-ant fungus so it can't spread its spores, a new study finds.

The finding explains how an ant colony can survive infestations by the zombie-ant fungus.

"In a case where biology is stranger than fiction, the parasite of the zombie-ant fungus is itself a fungus, a hyperparasitic fungus that specializes in attacking the parasite that turns the ants into zombies," said study leader David Hughes of Penn State University in a statement.

Fungi in the genus Ophiocordycepsare known to infest an ant's brain, manipulating the ant to drunkenly wander along the rain-forest leaves before clamping its jaws around the main vein on the leaf's underside mass grave; past research by Hughes found the ants are manipulated to clamp down on that leaf at high noon, though they don't actually die until sunset, possibly a strategy that gives the fungus a long cool night during which it can burst from the ant's head and begin growing its spore-releasing stalk. [Mind Control: Gallery of Zombie Ants]

These mass graves stay around in the same spot for years sometimes, a plus for scientists wanting to estimate mortality rates due to zombie parasitism.

Hughes and his colleagues had noticed while walking through these rain forests they would see the zombie-ant fungi covered in a white, fluffy fungus.

"What we found was that there was another player involved, something we hadn't considered before," Hughes told LiveScience. "This hyperparasite fungus is gaining its lunch by eating the zombie-ant fungus, limiting the fungus from producing spores."

It's a "hyper" parasite fungus, because it actually lives on, or infests, another parasite (the brain-manipulating fungus).

To find out just how beneficial this hyperparasite might be, the international team of researchers used data collected in the rain forests of Brazil and Thailand of the ants Camponotus leonardi (Thailand) and C. rufipes(Brazil), along with the two zombie-ant fungal species, Ophiocordyceps unilateralisand O. camponoti-rufipedis, that infect those ants, respectively. The data included various graveyards with information about each ant cadaver in each graveyard, such as whether the ant cadaver had a stalk growing from its head with no fruiting body (the soccer-ball-shape structure holding the spores), one with a fruiting body, or one with a fruiting body covered in the hyperparasite fungus.

They also crafted a model with this information to look at the life stages of the mind-controlling parasite. Their results showed that only about 6.5 percent of those soccer-ball-shape organs on the tops of stalks were viable. The fluffy hyperparasite fungus essentially grows on top of this spore ball and starts munching.

"Even though there are a lot of dead and infected zombie ants in the neighborhood, only a few of the spores of the zombie-ant fungus will become mature and able to infect healthy ants," Hughes said.

Their findings, detailed online May 2 in the journal PLoS ONE, suggest the crowded graveyards strewn with zombie-ant cadavers belie the actual danger to the ant colony as a whole, Hughes said.

Hughes is primarily interested in studying how diseases spread, for instance, through tropical rain forests, saying that ant colonies are like little cities in the rain forest where he can study transmission from ant to ant and from colony to colony.