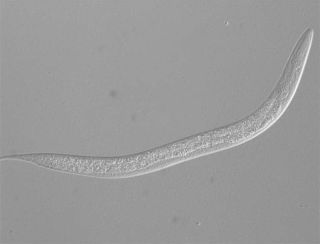 Basiru Leigh peers into a microscope in the lab of Oliver Hobert of Columbia University in NY. Leigh is examining mutant ground worms from a species known as C. elegans.

"There! You see?" he exclaimed. "They are moving abnormally — in a circle instead of a U-shape." This uncoordinated movement is a symptom of the worms' motor neuron disease; Leigh is trying to find the cause. His hypothesis: two transcription factors, proteins that regulate the expression of other genes, play a role in the mutant worms' abnormal movements.

Some of the most vexing and horrific human diseases, such as Spinal Muscular Atrophy and Amyotrophic Lateral Sclerosis, are neurological disorders that result from the degeneration and death of motor neurons, the cells that control muscle activity like speaking, walking, breathing and swallowing.

Understanding the root causes of these diseases would be one benefit of the research taking place in Hobert's lab at Columbia. Under Hobert's guidance, post-docs and graduate students — and a handful of younger students like Leigh — are trying to figure out how neurons develop and differentiate in C. elegans, a microscopic worm whose nervous system is analogous in many ways to that of humans.

Leigh has the opportunity to work in Hobert's lab thanks to Harlem Children Society, an NSF-funded program created ten years ago by Sat Bhattacharya, a molecular geneticist at Memorial Sloan Kettering.

The goal of the non-profit is to encourage low-income and minority high school students (95 percent minority; more than 58 percent female) to pursue careers in science, technology, engineering, and math (STEM) and allied disciplines through a unique, hands-on program that includes paid research internships at leading institutions and weekly workshops and seminars.

Harlem Children Society began in New York City, but has expanded and customized its program to meet local needs at rural and urban sites across the United States and the globe.

Leigh began with Harlem Children Society five years ago, when he was 15 years old and entering his sophomore year at the Bronx High School for Medical Science. He credits the program with his success at City College, where he just completed his second year with a double major in biology and computer science.

This summer, Leigh is one of two Harlem Children Society students working in Hobert's lab. Leigh is working under the direct mentorship of Paschalis Kratsios, a post-doc whose research focuses on the role of several transcription factors in motor neuron development and survival. Transcription factors are critical because of their role regulating the expression of so many other genes. An understanding of how they work could allow scientists to control the process of neuron development and ultimately find treatments for neurological diseases like Parkinson's, Alzheimer's and Amyotrophic Lateral Sclerosis.

Kratsios has designed a simple but important project that Leigh can complete during the 12-week duration of his mentorship: a study of transcription factors Vab-15 and Zag-1 and their role in coordinating the movements of C. elegans.

C. elegans is a particularly useful organism for neurological research because it has a simple nervous system (a total of 312 neurons) and a three-day developmental cycle. It also has transparent skin, which is helpful when examining motor neurons under a microscope.

Leigh began his research looking at the role of Transcription Factor Zag-1 using a basic genetic experiment. First, he bred genetically normal worms, whose motor neurons were marked with green florescent proteins (GFPs), with mutant worms missing Zag-1. Then Leigh separated out the progeny demonstrating the same uncoordinated movements as their mutant parents. The progeny's motor neurons were now all marked with GFPs and, using a florescent microscope, Leigh was able to count them to find out if the uncoordinated progeny had fewer motor neurons than their normal parents.

Leigh's finding was surprising: the uncoordinated offspring did have all their motor neurons. Leigh was now able to conclude that the absence of Zag-1 does not affect the survival of motor neurons. The uncoordinated movements of the mutant worms could instead result from some or all of the motor neurons not working correctly. But in exactly what way are they dysfunctional? This question is what Leigh hopes to answer in the next phase of his research.

To answer it, Leigh will conduct another genetic experiment. This time he will breed Zag-1 mutant worms with normal worms bearing GFPs activated only when motor neurons release their neurotransmitters. Leigh expects that when he examines the uncoordinated progeny of this new pairing, some of their motor neurons will not light up with GFP. This result would indicate that the absence of Zag-1 affects the neurotransmitter pathway in C. elegans' motor neurons.

Leigh said the experience of working with a mentor in a real lab is invaluable: "Dr. Kratsios explains everything in detail — I have learned so much more about genetics here than in class." And he is thrilled to have the opportunity to conduct his own research: "At my age, to get this chance to do my own research…it's the best."

But for Leigh, who hopes one day to be a neurosurgeon, the most exciting thing about the experience is participating in research that might one day contribute to treatments for diseases like Parkinson's. "Muhammad Ali is one of my heroes," Leigh said, "so it's really cool to do something that could one day help him."

Editor's Note: This research was supported by the National Science Foundation (NSF), the federal agency charged with funding basic research and education across all fields of science and engineering.  Any opinions, findings, and conclusions or recommendations expressed in this material are those of the author and do not necessarily reflect the views of the National Science Foundation. See the Behind the Scenes Archive.