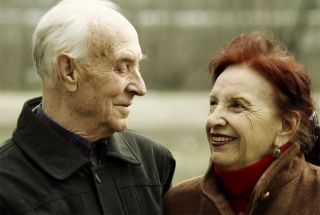 Seniors tend to feel about 13 years younger than their age.
(Image: © dreamstime.)

Q. Is ALS an old-person’s disease, or does it affect every age group?

Amyotrophic lateral sclerosis (ALS) usually strikes between the ages of 40 and 70, but there have been cases of it in young adults, children and older people. The average age for getting ALS is 55.

ALS is known as Lou Gehrig’s disease in the USA. Gehrig, who played baseball for the New York Yankees, died of the disease in 1941. In other countries, ALS is often called motor neuron disease. It is not contagious.

ALS destroys nerve cells—motor neurons—that control muscle cells. In most cases, the cause is unknown. As the motor neurons are lost, the muscles they control weaken. Eventually, people with ALS are paralyzed.

Amyotrophic means “no muscle nourishment.” Lateral identifies the affected areas in the spinal cord. Sclerosis refers to the scarring or hardening in the region.

The most common form of the disease in the United States is “sporadic” ALS. It may affect anyone, anywhere. “Familial” ALS is inherited. Only about 5 to 10 percent of all ALS patients appear to have the inherited form of ALS. In those families, there is a 50 percent chance each offspring will inherit the gene mutation and may develop the disease.

Respiratory problems usually kill those with ALS in three to five years after diagnosis. About ten percent of those with ALS live more than ten years. Some survive for many years. For example, the famed British physicist Stephen Hawking has had ALS since the 1960s. In a small number of people, ALS mysteriously stops.

The usual early symptoms of ALS are weakness or spasms in a limb, and trouble speaking or swallowing. After the initial symptoms, the disease may progress in the following way: cramping of muscles, demitted use of the limbs; thick speech and difficulty projecting the voice; difficulty breathing.

Doctors begin testing for ALS by checking muscle and nerve function. The next step is usually an electromyogram (EMG). This test measures the signals that run between nerves and muscles and the electrical activity inside muscles. Additional tests may include a magnetic resonance imaging (MRI) scan, a spinal tap between two lower vertebrae, blood tests and muscle biopsies.

Rilutek (riluzole), which is approved by the U.S. Food and Drug Administration, is the only drug found so far that helps prolong life in people with ALS.

However, there are non-pharmaceutical treatments to help people with ALS. These include physical and occupational therapy, respiratory therapy and assisted ventilation, speech therapy, nutritional and emotional support. There are devices, too, such as special grips for writing implements and eating utensils, canes, supportive braces, walkers, wheelchairs and scooters.

The Healthy Geezer column publishes each Monday on LiveScience. If you would like to ask a question, please write fred@healthygeezer.com. © 2009 by Fred Cicetti.