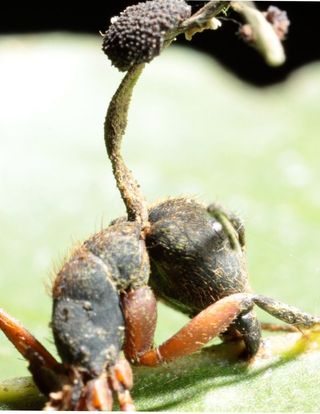 After a zombie fungus kills a carpenter ant, it grows a stalk from the insect's corpse that will sprinkle spores on new hosts.
(Image: © Penn State)

A fungus that turns worker ants into zombie henchmen has a surprisingly clever strategy to recruit new hosts.

The parasite doesn't attack the nest directly. Rather, the fungus leads ants to their deaths along the outskirts of the colony, creating a "sniper's alley" where the corpses can discreetly spread deadly fungal spores, new research shows.

The parasitic fungus in question, Ophiocordyceps camponoti-rufipedis, is named for the species of carpenter ant that it inhabits, Camponotus rufipes. Under the influence of the fungus, a zombie carpenter ant is led away from its home and forced to climb plants in the understory of the rainforest canopy. After the ant latches onto the underside of a leaf and dies, the fungus sprouts a long stalk from the ant's cadaver with spores that rain down on the forest floor and infect new ants from the colony that are out on foraging trips. [Mind Control: Gallery of Zombie Ants]

It's easier for the fungus to attack outside the colony, because ants are social animals and band together to limit the spread of a disease. In the new study, published yesterday (Aug. 18) in the journal PLOS ONE, scientists working at a research station in Brazil put infected ant corpses inside of several nests. They found that the fungus stalk was not able to grow properly on any of the ant corpses. What's more, healthy ants removed most of corpses from the nests after several days.

"Ants are remarkably adept at cleaning the interior of the nest to prevent diseases," study researcher David Hughes of Penn State University said in a statement. "But we also found that this fungal parasite can't grow to the stage suitable for transmission inside the nest whether ants are present or not. This may be because the physical space and microclimate inside the nest don't allow the fungus to complete its development."

Hughes and colleagues also recorded the exact locations of fungus-infected ant corpses in relation to the ants' foraging trails around four different nests. (Carpenter ants in this area don't just stick to the forest floor; they often use twigs and branches to make bridges while looking for food.) The researchers plotted the data on 3D maps and found that the dead, spore-spreading ants were essentially positioned at the colony's doorstep.

"What the zombie fungi essentially do is create a sniper's alley through which their future hosts must pass," Hughes explained in the statement. "The parasite doesn't need to evolve mechanisms to overcome the effective social immunity that occurs inside the nest. At the same time, it ensures a constant supply of susceptible hosts."

The researchers said they found an average of 14.5 fungus-infected ant cadavers per month per colony. While none of the colonies in the study collapsed as a result of the zombie invasion, none of the colonies were able to entirely get rid of the fungus, either. Because they remain a constant threat, parasitic infections could be viewed as a "chronic disease" for carpenter ants that can be controlled but not cured, the researchers wrote.