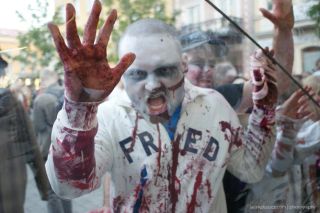 Citizens of the United States, breathe easy: The Pentagon has a plan in case of a zombie attack.

Don't pack your bug-out bag and put up your zombie defenses, yet, however. CONPLAN 888, first uncovered this week by Foreign Policy magazine, is not an indication that the Department of Defense has gone off the deep end. The plan, written in 2011, was part of a training exercise.

And a detailed one, at that. The plan summarizes responses to threats ranging from pathogenic zombies (zombies created via infection) to space zombies (what they sound like) to chicken zombies (they really exist!). Here's what you need to know.

The U.S. military is not actually expecting the country to be overrun by zombies. But the work and thought that went into making the plan was very real. [Everything You Need to Know About Zombies (Infographic)]

"During the summers of 2009 and 2010, while training augmentees from a local training squadron about the JOPP [Joint Operation Planning Process], members of a USSTRATCOM [U.S. Strategic Command] component found out (by accident) that the hyperbole involved in writing a "zombie survival plan" actually provided a very useful and effective training tool."

Joint operation planning involves organizing between multiple branches of the military. It's a complex task, and training can be fraught. If real countries are detailed in the plan, the public might mistakenly believe the plans are real. Using zombies gets around that problem (for most citizens, at least).

Using zombies was also fun, the report's authors write. By allowing the trainees' imaginations to run wild, the instructors were able to teach them about the basics of writing military plans and orders, they wrote.

"If you suspend reality for a few minutes, this type of training scenario can actually take a very dry, monotonous topic and turn it into something rather enjoyable," they wrote in a disclaimer to the report.

2. There are eight types of zombies

Space zombies come from space or originate from extraterrestrial toxins. The report notes, "Asteroids and nuclear space radiation that can convert people into zombies can affect any landmass or population on Earth." Weaponized zombies are bioengineered by hostile forces. Symbiant-induced zombies are similar to pathogen-induced zombies, but they are created by parasitic life forms and don't kill their host right away. [Mind Control: A Gallery of Zombie Ants]

Vegetarian zombies eat only plant life. They don't threaten humans directly, but they could destroy basic food crops. The report notes that instead of moaning, "braaaaains," vegetarian zombies groan, "graaaains." (And you thought the military didn't have a sense of humor.)

The final threat noted in the report is chicken zombies.

Oh yes. Unlike the other seven potential zombie threats, chicken zombies are "the only proven class of zombie that actually exists," the report notes.

Chicken zombies are old egg-laying hens that are no longer profitable for poultry farmers to feed and house. The cheapest way to dispose of these birds is to euthanize them and turn them into compost. Farmers gas birds with carbon monoxide to kill them, but survivors are sometimes seen struggling out of piles of dead chickens. A 2006 Associated Press article described the phenomenon and the response from animal-cruelty organizations.

"CZs are simply terrifying to behold and are likely only to make people become vegetarians to protest animal cruelty," the military report notes. It goes on to add that counter-measures against chicken zombies fall under the jurisdiction of the U.S. Departments of Justice, Homeland Security, Agriculture and the Food and Drug Administration.

4. The legal status of zombies

Chicken or otherwise, zombies qualify as neither human nor animal life, the report notes. Thus, the military is free to counterattack without concern for U.S. and international laws that regulate treatment of opposing forces. Given the dire nature of the threat, the country would likely be under martial law during a zombie attack, the plan goes on to note. Because zombies can't be reasoned with and they don't fear pain or death, riot-control strategies would do no good. Zombies are also unable to swim, the report helpfully notes.

An effective response to zombie attack will have to involve the Centers for Disease Control and Prevention (CDC), the plan notes. As there is no known zombie medical cure, the CDC is the best source for pushing back against the pandemic. Fortunately, the CDC is one step ahead of the military on this one: In 2011, the agency wrote a blog post on how to prepare for the zombie apocalypse. The plan was to promote real disaster preparedness, but the post went viral.

Humans infected by the zombie plague may overrun hospitals, the military report notes. Other stalwarts of the medical field might help against a zombie attack, however. Hand sanitizers are marketed as killing 99 percent of germs.

"Although none of these products has ever indicated any efficacy against biohazard level 4 pathogens like Ebola, it is entirely possible that such products could limit or delay the spread of pathogen-based zombieism if properly employed," the report reads.