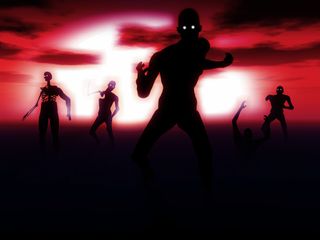 First there was "Dawn of the Dead." Then there was "Pride and Prejudice and Zombies" (Quirk Books, 2009). Now, the Centers for Disease Control and Prevention (CDC) are jumping on the zombie bandwagon.

Yes, that CDC. A post on the health agency's blog titled "Preparedness 101: Zombie Apocalypse" went viral this week, causing the blog's servers to temporarily crash. The blog normally gets 1,000 to 3,000 hits per day, said CDC spokesperson Dave Daigle. Before the page went down on Wednesday (May 18), the post had garnered 30,000 hits. As of Thursday morning, 55,000 people had clicked on the post.

"We did not anticipate this type of reaction," Daigle told LiveScience.

Nor have Daigle and his CDC colleagues gone off the deep end. The zombie post is a tongue-in-check way to promote real disaster preparedness.

"If you're prepared for the zombie apocalypse, you're also prepared for hurricanes and flooding," Daigle said.

So what do you need in case of an attack by zombie hordes, according to the CDC post? An emergency kit stocked with 1 gallon of water per person per day, as well as non-perishable food, important documents and first-aid supplies. You'll also want a plan: A place for family members to meet in case of emergencies and an evacuation route to steer you clear of brain-craving zombies (or floodwaters, as the case may be).

Daigle said the zombie post has been a success, garnering media attention and publicity for preparedness. The agency plans to do a follow-up evaluation to see if the zombie-themed message prompted people to take action on real-life emergency plans. One thing the agency won't do, though, is suggest the best way to eliminate the zombie menace.

"We'll let the law enforcement folks make recommendations about weapons and chainsaws and guns," Daigle said. "We don't have that in our plan."