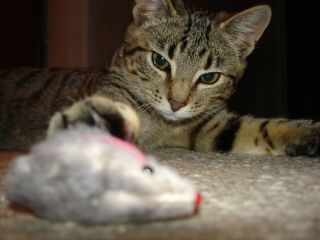 When the bizarre parasite Toxoplasma gondii infects rats, it turns the rodents fearless, reducing their natural aversion to the odor of cat urine. But despite this bravery, infected rats remain terrified of other scary stimuli.

Now, a new study hints at how T. gondii, or "toxo," makes this strangely specific fearlessness happen: In infected rats, the smell of cat urine activates sexual attraction pathways in the brain, spurring the animals to approach the odor rather than run away.

Although T. gondii can infect many mammals, including humans, this rodent mind control is likely an adaption by the parasite to ensure it gets into the intestines of a cat, the only place it can reproduce sexually.

"Something is perturbing these pathways, and it looks like that something is toxo," said study researcher Patrick House, a neuroscientist at Stanford University. [Top 10 Diabolical and Disgusting Parasites]

About 30 percent of people worldwide are infected with T. gondii, mostly through eating undercooked meat or contact with cat feces. In healthy humans, the parasite doesn't cause symptoms, though pregnant women are advised to stay away from cat litter boxes, because T. gondii can cross the placenta and kill a developing fetus.

Infected rodents, on the other hand, lose their fear of cats. The goal of the new study, published today (Aug.17) in the open-access journal PLoS ONE, was to tease apart whether the rodents are actually attracted to the urine or whether they're just less afraid of it, House told LiveScience.

House and his colleagues exposed infected and noninfected male rats to either the smell of a female cat in heat or the scent of bobcat urine. Shortly after the scent test, they anesthetized and killed the rats and then removed their brains to analyze them for signs of recent activity in regions responsible for approach- and-avoidance behavior.

In noninfected rats, the researchers found an expected pattern in the limbic system, the brain system responsible for emotion, fear and long-term memory processing. Urine triggered fear-related areas of the limbic system, while a female in heat triggered sexual attraction areas.

In contrast, the brains of the toxo-infected rats looked odd. In rats exposed to cat urine, the fear pathway still showed signs of activity, House said. But so did the sexual attraction area, suggesting that sexual drive may trump infected rats' fears.

"The animals still seem to be afraid, but we're getting activity in both," House said.

How T. gondii pulls this off, "we don't know at all," House said. Intriguingly, the parasite does preferentially settle in the limbic areas of the brain near the fear and sexual attraction regions.

Toxoplasma infection also raises brain levels of the neurotransmitter dopamine. Researchers have found that the parasite has a gene that codes for an enzyme crucial in dopamine production, suggesting that altering neurotransmitter levels might be a key way the T. gondii controls the brain.

High dopamine is a factor in schizophrenia, raising concerns about whether T. gondii might play a role in the genesis of the mental disorder. A 2006 study published in the journal Proceedings of the Royal Society B found that antipsychotic drugs, commonly used to treat schizophrenia, reverse the fearlessness effects of T. gondii in the brain.

House's next step is to drill deeper into T. gondii's behavior in the brain.

"These findings showed what is happening, but don't show how it's happening," he said. "So what I want to do is get in and figure out at the neuronal, cellular level, how is toxo changing neurons?"