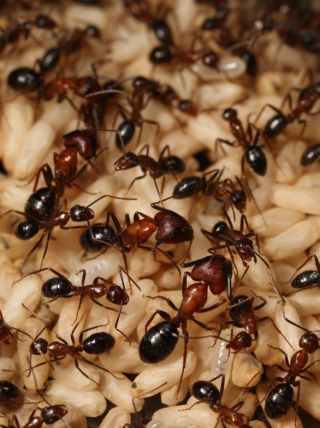 Ants may be experts at sniffing out body odor, according to a new study that reveals these insects have a "high-definition ability" to detect tiny chemical changes in the pheromones other ants give off.

Scientists from the University of California, Riverside, studied how ants tell each other apart in their colonies based on tiny, nearly undetectable changes in how other ants smell. The research, published today (Aug. 13) in the journal Cell Reports, revealed how much ants' sniffing abilities may have been underestimated.

Social insects, like ants, detect each other's smells using sensors in their antennae. It was initially thought that ants used these smells to distinguish between friends and foes, but the new study suggests the insects' abilities go further than this. [See Close-Up Photos of Amazing Ants of the World]

The researchers tested how the ants react to different odors by sticking tiny glass electrodes into single sensory hairs on the insects' antennae, which were then exposed to puffs of different hydrocarbons. The electrodes acted like sensors to show whether each antenna was responding and if the ant had recognized a smell. The researchers discovered that ants are highly sensitive to chemical changes, with sensory neurons able to respond to a variety of subtly different hydrocarbon odors.

The scientists were also curious about whether the ants understood the actual chemical compound. So in a second experiment, the researchers paired one hydrocarbon with a sugary reward and one with plain water.

"We found that the ants were really superb at being able to make [their] way to the hydrocarbon that had originally been paired with the reward," said study lead author Anandasankar Ray, an associate professor of entomology at the University of California, Riverside. "It's a very unusual ability that I think is unique to social insects that live in large colonies."

As it turns out, ants are quite the connoisseurs when differentiating among body odors. The Camponotus floridanus ants in this study have more smell-sensing genes than humans do, the researchers said.

Ray said that although people may be able to train themselves to distinguish among subtle variations in odors, such as the "difference between, say, a pinot noir and a cabernet," human noses are not up to the standards of ant antennae. In fact, most animals would not be able to detect the hydrocarbons in the study as a smell at all, he added.

"I think what is unique to the ants is that they are able to discriminate these very low-volatility chemicals — these hydrocarbons, which humans cannot perceive," Ray told Live Science.

How volatile a compound is refers to how easily it boils and turns into a gas to be smelled. Shorter hydrocarbon chains have fewer bonds that need to break, so they turn into gas faster. The hydrocarbons on the ants have low volatility, meaning they have long chains and low levels of the chemical evaporate at room temperature to be sniffed.

Detecting such small doses requires a meticulous sense of smell, which may have evolved as a way for ants to navigate their complex social networks, the researchers said.

"Imagine that there are hundreds and thousands of these social insects in a colony," Ray said. "It's really critical for them to be able to tell the difference between [a] major worker, a minor worker, a queen and different individuals within a colony, in order to be able to coordinate their social experience."

The researchers said they think low-volatility hydrocarbons fit the bill for detecting such differences, because ants interact with each other in close quarters. If the odors were strong, the ants would likely get confused, the researchers said. Ants get so close when they touch antennae and sniff each other, it is the equivalent of "shaking hands and exchanging business cards," Ray said.

The researchers hope this study will provide better understanding of how communication between animals evolved as a trait. In addition, knowing how insects react to hydrocarbons could lead to new ways of controling and regulating the creatures' populations, the researchers said. The C. floridanus ants in the study aren't a destructive species, but Ray said there are other harmful, invasive ants in the world.

When you're dealing with an insect that ruins a lot more than a picnic, using natural, unscented means to control the invaders could be an attractive alternative to pesticides, he added.