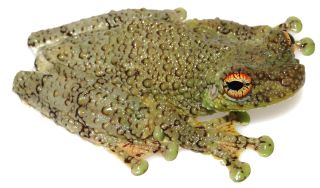 Calls of the newly discovered tree frog species Tepuihyla shushupe have long been mistaken for the "songs" of a bushmaster viper.
(Image: © Pablo Venegas)

Local folklore in the Amazon region and in parts of Central America claims that the bushmaster — a giant and deadly viper — can "sing." The breathy, repetitive notes of this call are associated with the venomous snake, and they instill fear in people living in the northwestern Amazon River basin, researchers have reported.

But scientists recently discovered who was really doing the singing.

In fact, more than one vocalist is responsible. The song attributed to the bushmaster turned out to belong to two types of tree frog: the little-known species Tepuihyla tuberculosa and a new species, Tepuihyla shushupe, whose name "shushupe" comes from the local term for the so-called "singing snake." [40 Freaky Frog Photos]

The scientists were researching frog populations in Ecuador and Peru when they learned of the alleged singing ability of the viper Lachesis muta from their field assistants, the researchers wrote in a new study.

But when the researchers investigated the sound identified by others as the viper's call, they instead tracked the call to two frog species. The researchers heard and analyzed a number of calls and obtained one T. shushupe individual, an adult male, in Peru's Putumayo River basin, close to the border shared with Colombia. From the calling behavior — which emanated from tree holes — the scientists interpreted that the frog lived in the canopy and descended into tree holes to breed.

T. shushupe and T. tuberculosa bothmeasure about 3 inches (85 millimeters) in length, which is large for this genus. Tepuihyla frogs typically reach about 2 inches (59 mm) in length. The study authors described the frogs' call as "a cackle of short notes repeated at a fast rate," with the amplitude and speed of the call building up during the first half and then decreasing toward the end.

So much for the local legends about the bushmaster's vocal prowess. However, some serpents can produce other types of unexpected noises.

King cobras are known to "growl" when agitated, producing the sound by resonating chambers in their tracheas, according to a December 1991 study published in the Journal of Experimental Zoology. And several species of snakes employ a defensive strategy known as "cloacal popping" — sometimes referred to as "microfarts" — made by expelling air from a vent in the cloaca, an opening at the rear of the body for the digestive and reproductive tracts.

It is unclear why the bushmaster was credited for the frogs' calls, but the researchers noted that the tale of the singing viper was widespread — and not just among people native to the Amazon basin. According to the authors, an earlier study reported that hunters and colonists shared similar stories about the viper's vocal abilities. Perhaps future investigations could get to the bottom of how people came to believe that a snake could sing, the study authors suggested.

The findings were published online Nov. 9 in the journal ZooKeys.