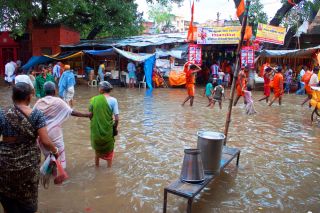 A monsoon often brings about thoughts of torrential rains, similar to a hurricane or typhoon. But there is a difference: a monsoon is not a single storm; rather, it is a seasonal wind shift over a region. The shift may cause heavy rains in the summer, but at other times, it may cause a dry spell.

What causes a monsoon?

A monsoon (from the Arabic mawsim, which means "season") arises due to a difference in temperatures between a land mass and the adjacent ocean, according to the National Weather Service. The sun warms the land and ocean differently, according to Southwest Climate Change, causing the winds to play "tug of war" eventually switching directions bringing the cooler, moister air from over the ocean. The winds reverse again at the end of the monsoon season.

A wet monsoon typically occurs during the summer months (about April through September) bringing heavy rains, according to National Geographic. On average, approximately 75 percent of India's annual rainfall and about 50 percent of the North American monsoon region (according to a 2004 NOAA study) comes during the summer monsoon season. The wet monsoon begins when winds bringing cooler, more humid air from above the oceans to the land, as described above.

A dry monsoon typically occurs between October and April. Instead of coming from the oceans, the winds tend to come from drier, warmer climates such as from Mongolia and northwestern China down into India, according to National Geographic. Dry monsoons tend to be less powerful than their summer counterparts. Edward Guinan, an astronomy and meteorology professor at Villanova University, states that the winter monsoon occurs when "the land cools off faster than the water and a high pressure develops over the land, blocking any ocean air from penetrating." This leads to a dry period.

The winds and rains

The monsoon season varies in strength each year bringing periods of lighter rains and heavier rains as well as slower wind speeds and higher wind speeds. The Indian Institute of Tropical Meteorology has compiled data showing yearly rainfalls across India for the last 145 years.

According to the data, the intensity of a monsoon varies over an average of period of 30 – 40 years. In each period, the amount of rain received is higher than average resulting in many floods or lower than average resulting in droughts. The long-term data suggest that the monsoon trends may turn from being in a low rain period that began in approximately 1970 to a higher rain period. Current records for 2016 indicate that total rainfall between June 1 and September 30 is 97.3 percent of the seasonal normal.

The most rain during a monsoon season, according to Guinan, was in Cherrapunji, in the state of Meghalaya in India between 1860 and 1861 when the region received 26,470 millimeters (1,047 inches) of rain. The area with the highest average annual total (which was observed over a ten year period) is Mawsynram, also in Meghalaya, with an average of 11,872 millimeters (467.4 inches) of rain.

Where in the world

A monsoon forms in the tropics (between 0 and 23.5 degrees latitude north and south) and subtropics (between 23.5 degrees and 35 degrees latitude north and south), according to World Monsoons. The strongest monsoons tend to occur in India and South Asia in the north and Australia and Malaysia in the south. Monsoons also occur in southern parts of North America, in Central America, northern areas of South America, and in western Africa.

Monsoon season in North America brings rainfall primarily to northern Mexico, Arizona, and New Mexico, and to a smaller extent to parts of Utah, Colorado, southern California and Baja California, according to the National Oceanic and Atmospheric Administration (NOAA). While the monsoon in North America is not as strong as those in India due to a lower and smaller plateau, the same patterns are followed.

A 2004 report was presented by NOAA describing studies on the North American Monsoon System. According to a case study, the North American Monsoon System is the least understood large-scale weather pattern that affects some of the more rapidly growing parts of the United States and Mexico. The researchers aimed to better understand the workings of the monsoon, the patterns, and any additional information that can be gathered to help predict the timing and strength of the seasonal monsoon.

The North American monsoon begins between May and June, peaks in July and August, and winds down between September and October, according to the 2004 study, drawing moisture from the Pacific Ocean and the Gulf of Mexico. There are many factors that are being researched in order to determine and predict the onset of the monsoon along with what the study calls the "flavor of the monsoon," which includes the strength and amount of rainfall. The study points to a number of influences that may have an effect on the North American monsoon. These potentially include seasonal occurrences such as hurricanes and other tropical storms, floods, and droughts, as well as El Niño and climate change.

The monsoon is important in many areas all around the world. Agriculture in many of these places, such as India, depends heavily on the summer monsoon season, according to World Monsoons. According to National Geographic, hydroelectric plants that produce electricity and the import/export trades are also highly dependent on the monsoon season.

In periods of lighter rain, according to World Monsoons, crops don't grow due to drought, farm animals starve, and the income and well-being of many farmers and families dropped significantly. Less electricity is being produced sometimes leading to electricity only being provided to large businesses or the wealthiest families due to increased costs. Because many farmers cannot grow their own food or produce extra to sell, food is imported from other areas of the world.

And with heavier rains comes massive flooding and landslides washing away not only crops and homes but people and animals as well. Diseases such as cholera, dengue, malaria, as well as stomach and eye infections are also more prevalent in the summers with heavier rains according to World Monsoons. Many of these diseases are spread though water systems that have been overloaded and have been unable to clean the water used for drinking, cleaning, and so on.

The North American Monsoon System also brings the start of the fire season in the southwestern United States and northern Mexico, according to 2004 NOAA report due to the increased amount of lightning brought on by pressure and temperature changes. The amount of lightning, up to tens of thousands of strikes per night in some regions according to the study, not only brings fires to the region but also power disruptions, and severe injuries.

According to a study by Yen Yi Loo, Lawal Billa, and Ajit Singh, a group of scientists from Malaysia, published in Geoscience Frontiers in 2015, the effects of global warming on a monsoon can potentially be devastating due to frequent shifts and changes in precipitation levels and timelines. World Monsoons estimates that there will be an increase in rainfall during the summer monsoon seasons in the next 50 to 100 years. Greenhouse gases, such as carbon dioxide, can make warm air hold onto more water only to release it as rain over already soaked areas. During the dry winter monsoon seasons, it is believed that the land will become drier as evaporation increases in warmer temperatures.

On shorter timescales, the amount of rainfall during a summer monsoon may be changed year to year by a variety of factors including air pollution, according to World Monsoons. El Niño in the Pacific oceans can also have effects on the monsoon in India on both the short- and long-terms, according to studies from the University of Colorado in Boulder.

There are many factors that can have an effect on a monsoon, including El Niño, and there is a great deal of research going into better understanding these factors and how the monsoon changes. Much of this research is going into how to better predict future and current rainfalls and winds, such as described in an article published in 2015 on Science Daily from the Office of Naval Research. The greater the knowledge about the workings of a monsoon, the more accurately the onset and strength can be predicted.

When approximately half of India's population works in agriculture and agriculture makes up eighteen percent of India's GDP, according to Stratfor, for example, the shifting in both timing of a monsoon and the amount of rain, can lead to big problems. With all of the ongoing research, perhaps the problems can turn into solutions.