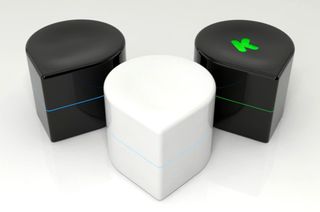 A new mobile robotic printer that is only a little bigger than three stacked hockey pucks will enable people to print anywhere and on any size page of paper.

Smartphones, tablets and laptops make it easy for people to work on the go, but traditionally, printers have been cumbersome to lug out of the office.

Zuta Labs, based in Jerusalem, reasoned that printers nowadays are essentially a printhead running back and forth on a moving piece of paper. The company's approach involves placing a printhead on a set of small wheels and letting it run across a sheet of paper, thus allowing printers to become smaller. [10 Technologies That Will Transform Your Life]

The new Zuta Pocket Printer is about 4 inches (10.2 centimeters) wide and long and 3 inches (7.5 cm) high, and weighs about 12 ounces (350 grams). It can connect wirelessly to smartphones, tablets, laptops and PCs via Wi-Fi, and is supported by Android, iOS, OS X and Windows. A free app from the company lets you use the printer via a mobile device; a laptop or PC can also select the printer for use just like any other wirelessly connected printer.

To print, a person switches on the device, aligns it with the corner of a sheet of paper and sends the document to it. The printer can print one average A4 page, measuring 8.27 by 11.7 inches (21 by 29.7 cm), every 50 to 60 seconds with a resolution of 300 dpi. Zuta Labs noted that its printer can print on any standard size piece of paper, and that, in principle, it could print on any surface, Elbaum told Live Science.

The printer's "omni-wheels" help it turn and move in any direction on a surface. Laser sensors help control the movement, speed and location of the device, according to the company.

If a person sends several pages to the device, the printer will stop when it gets to the bottom of the first page and wait until it is placed at the top of the next page. Users can then tap on the mobile app, and the printer will continue to print.

Zuta Labs said the printer's rechargeable lithium-polymer battery can last about 1 hour, on average — long enough to print about 60 pages. The device charges via a micro-USB port, and takes about 3 hours to charge fully.

One ink cartridge can print more than 100 pages, according to the company. Currently, the device prints only in black, although Zuta Labs said it plans to have a full-color printer in the future. Cartridges are replaced via a hatch on the bottom of the printer.

The founders of Zuta Labs, which was established in 2014, said the idea for their printer came in 2013, when they were students at the Jerusalem College of Technology. A 2014 Kickstarter campaign to fund Zuta Labs raised $511,662 from 3,081 backers, exceeding its original goal of raising $400,000. The company plans to ship its printers to customers in the beginning of 2017.