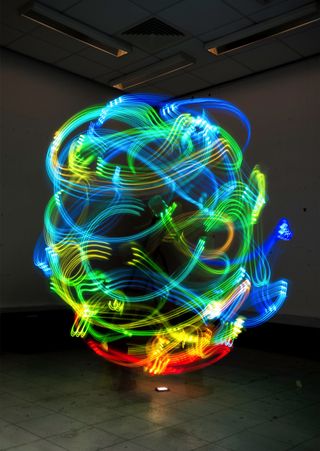 With the help of an instrument called the Kirlian Device, Luis Hernan, a Ph.D. student at Newcastle University, in the United Kingdom, has found a way to map wireless networks using beams of light.
(Image: © Luis Hernan/Digital Ethereal project)

Wireless networks are normally invisible to the human eye, but a magic touch of creative photography can turn them into vibrant and colorful beams of light.

With the help of an instrument called the Kirlian Device, Luis Hernan, a Ph.D. student of architecture and interaction design at Newcastle University in the United Kingdom, has found a way to breathe digitalized life into invisible wireless networks, creating colorful and ghostly images.

So, how does it work? The Kirlian Device constantly scans for wireless networks and translates signal strength into LEDs (light-emitting diodes). The instrument then captures the networks using long-exposure photography, mapping them as vibrant beams of light. [See more stunning photos of invisible wireless networks]

"Through these colors, you can see how the wireless network is behaving," Hernan told Live Science.

Hernan has also developed a free Kirlian Device app for Android smartphones that people can use to capture their own images of wireless networks.

Hernan's exploration of wireless networks was part of an initiative called "Digital Ethereal," in which he "blended together disciplines and techniques such as performance, photography, design, programming and electronics," according to the project's website.

The Kirlian Device was named after Semyon Davidovich Kirlian, a Russian inventor who developed a photographic technique to capture electrical coronal discharges, which is the glow that can often be seen around energized metal conductors carrying high voltages.

Some Kirlian photographs of wireless networks were recently showcased in an exhibit, dubbed "The Secret Body of Wireless," at Newcastle University's School of Architecture. For the show, Hernan also created an art installation of Android phones hanging from the ceiling, running a modified version of the Kirlian Device app. This enabled visitors to see how Wi-Fi networks in the room were constantly changing. The visitors could also try out another version of the mobile app designed for Google Glass.

With society's increasing reliance on smartphones, tablets and laptop computers, people are constantly searching for better Wi-Fi or mobile signals, so these networks are] changing the way people understand space, Hernan said.

"[T]here is a whole new dimension of space, where we start to remap the way in which we pattern spaces — certain spots become suddenly more important because they happen to be the only place where Internet will come through," he said.