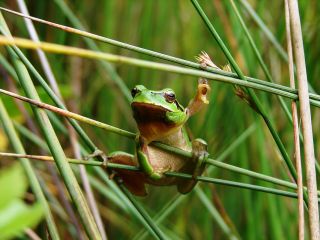 When it's just too darn hot, amphibian young adapt by changing their diet, weathering heat with vegetarian fare.

In a new study, tadpoles representing three frog species were exposed to mock "heat waves" in the laboratory to test how amphibians in the wild might respond to warmer-than-average conditions due to climate change.

When temperatures rose, so did the tadpoles' preference for vegetarian menus, the researchers found; the tadpoles consumed more plant-based meals when the controlled environments were hotter. [40 Freaky Frog Photos]

Scientists are particularly interested in how the dietary needs of amphibians and other ectotherms, or "cold-blooded animals" — those that use external sources to regulate body temperature — may be affected by a warming world, the researchers wrote in the study. Changes in temperature can affect how efficiently ectotherms process their food, and shifting to a more plant-based diet could help them compensate for those metabolic changes, the researchers said.

As climate change is spawning more frequent and more intense heat waves, the researchers wanted to see if amphibian young — tadpoles — would change their diets when exposed to artificial "heat waves."

In the study, the first to explore temperature-related diet changes in vertebrates, the scientists looked at three frog species that were native to the Iberian Peninsula in southwest Europe. The researchers collected eggs belonging to the Iberian painted frog (Discoglossus galganoi), the European tree frog (Hyla arborea) and the Mediterranean tree frog (Hyla meridionalis). The eggs were installed and hatched in aquariums in a laboratory.

In the experiment, the researchers gradually heated up the tadpoles' watery homes for periods lasting from one week to two months, to simulate how pond habitats might warm during a naturally occurring heat wave. They provided the growing tadpoles with meals of insect larvae and plant stalks, and then observed what the tadpoles ate and how their health and growth were affected.

"Normal" water temperature for the tadpoles was established at 70 degrees Fahrenheit (21 degrees Celsius), but then things heated up — temperatures sometimes rose as high as 77 degrees Fahrenheit (25 degrees Celsius) for days at a time. Although the three species had somewhat different diets, all consumed a higher percentage of plants, perhaps because they could process them more quickly, study co-author Germán Orizaola, a researcher in the Department of Ecology and Genetics at Uppsala University in Sweden, told Live Science in an email.

This is the first evidence that higher temperatures could drive ectotherms to increase their plant intake, and the first study to show this degree of flexibility in diets as animals adapt to climate change, the authors wrote.

But it also hints at how ecosystems — and the dietary needs of their inhabitants — could change in a warming world. Orizaola explained that if more amphibians require algae and plants to survive, the availability of those resources goes down, which, in turn, can affect other animals and even reduce water quality.

"This study provides us with information about how to manage freshwater environments exposed to the challenges of climate change," he added.

The findings were published online today (Nov. 3) in the journal Ecology.