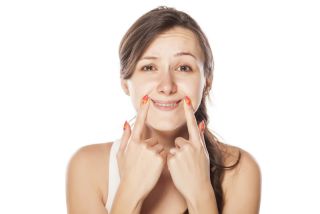 Perhaps you've heard that you can brighten your mood just by faking a smile. But that idea, which came out of a psychological experiment from the 1980s, may not be true after all, as scientists were not able to repeat the results in a lab setting in a large, rigorous new study.

The hypothesis, called the facial-feedback hypothesis, dates back to a 1988 study in which participants rated the humor of cartoons while inadvertently mimicking either a smile or a pout. The participants were simply asked to hold a pen in their mouths, either with their lips (which pushes the face into a frown-like expression) or their teeth (which mimics a smile). The participants who used the pen to mimic a smile rated the cartoons as funnier.

Now, a 17-lab effort with 1,894 participants finds no evidence that such an effect exists. It's the latest in a string of failed replications in psychology, including the recent finding that willpower may not be a limited resource, as many psychologists had believed.

The failure of an idea to hold up in a replication study, however, rarely settles the question of whether or not a result is valid. The originator of the facial-feedback hypothesis, psychologist Fritz Strack of the University of Würzburg in Germany, argued that the replication study changed enough of his original experiment so that it no longer was a true replication. [Smile Secrets: 5 Things Your Grin Says About You]

"Now, I'm not sure what we've learned [from the new findings] other than the effect is not very strong," Strack told Live Science. "And that, we knew to begin with."

The facial-feedback hypothesis was a compelling finding, because it suggested that the tail wags the dog, so to speak: Your body's movements can affect your mood, not just the other way around. It's an idea that dates back to at least as far as Charles Darwin, who wrote in "The Expression of the Emotions in Man and Animals" (John Murray, 1872), "He who gives way to violent gestures will increase his rage: he who does not control the signs of fear will experience fear in a greater degree."

Strack's research kicked off a line of research that expanded the findings into new areas, including a 2010 paper that found that in people who were treated with Botox, which paralyzes the facial muscles, the drug impedes the strength of people's emotions. Strack volunteered his work for a replication attempt, expecting it to be confirmed.

"In the beginning, when we first did the experiments, I was more skeptical," he told Live Science. "But after it had been replicated many times, I had expected that it would also be replicated in this kind of exercise."

These published replications, listed by Strack in an additional document, were typically not direct repeats of the 1988 experiment, however. While they generally used the pen-holding method to prompt the facial expressions, they used different outcomes such as ratings of funny movies, ratings of other people's facial expressions, or creativity.

Other psychologists applauded Strack for his willingness to put his study up for a replication experiment that matched the scale of the new study. "Fritz Strack was very brave to put forward his own experiment, because in this game, the people who have originally proposed the experiment do not have a lot to gain," said Eric-Jan Wagenmakers, the lead researcher of the replication attempt and a psychologist at the University of Amsterdam in the Netherlands.

Strack offered advice to the researchers who conducted the replication study on how to set up the experiment, but was not otherwise involved in the study. Wagenmakers and colleagues in 17 labs around the world recruited participants and repeated Strack's pen-in-mouth experiment. They used the same cartoon series, "The Far Side," that was used in the 1988 experiments, but they selected different cartoon panels, which they tested among outside raters to ensure that the raters reached consensus that each cartoon used in the study was "moderately funny." They created a video with instructions for the participants so that an experimenter giving directions wouldn't inadvertently influence the participants, and they recorded the experiment with cameras to ensure that only those participants who perfectly completed the pen-holding part of the experiment would be included in the data analysis.

"We wanted to maximize the opportunity of finding the effect," Wagenmakers told Live Science. [25 Weird Things Humans Do Every Day, and Why]

The researchers pre-registered their replication attempt, meaning they determined exactly how they'd statistically analyze the data beforehand, to prevent any unconscious temptation they might have had to cherry-pick data among the findings. They even wrote the skeleton of the research paper beforehand, leaving blanks for the yet-uncollected data.

Wagenmakers said that he was relatively confident that the facial-feedback effect would be confirmed in the study — although "relatively confident" for a scientist focused on research methods means that he would have given it a "30 percent shot to work out," he said. [No Duh! The 10 Most Obvious Science Findings]

It didn't work out.

"None of the experiments yielded a statistically reliable effect individually," Wagenmakers said. "Overall, these are the kind of data you would expect to see if you tried to replicate an effect that doesn't exist or is so small you can't find it with the paradigm you were using."

The researchers published their results Oct. 26 in the journal Perspectives on Psychological Science. Strack, writing in a separate article that accompanied the study in the journal, criticized some of the methods the researchers used. The participants were drawn from psychology classes in many cases, he said, so they might have known the goal of the research. In addition, "Far Side" cartoons may not be so funny 20 years after their peak in popularity and across different cultures. The cameras in the room might have made participants self-conscious and affected their emotional responses to the cartoons.

"This is a subtle procedure, and it's therefore very likely to be affected by changes in the context," Strack told Live Science.

Wagenmakers said that the cartoons were pre-tested for their humor value, so there's no evidence that today's participants found them any different than 1988's participants did. The cameras could theoretically alter the results, he said, but sitting across from an experimenter would likely make people feel self-conscious, too.

"I would find it remarkable if this effect would disappear completely because of the use of cameras instead of people watching you," he said.

The failed replication doesn't definitively prove that the facial feedback hypothesis doesn't exist, but the ball is in the court of the proponents of the facial-feedback hypothesis, Wagenmakers said. If he were in their shoes, he said, "I wouldn't just argue about how the experiment could have been done differently. I would take action and show [the critics] with data that they were wrong."

Strack said he hopes to do that: He's collaborating with researchers in Israel who want to test whether the cameras could explain the nonreplication. But he downplayed the importance of replication for theories like the facial-feedback hypothesis.

"If you want to find an applied intervention in education, in therapy, or whatever, then it's really important to find a strong effect," he said. "But if you're doing that with a theory, that's not that necessary. It's kind of necessary that you find it under conditions that you describe, but if it does not replicate under other conditions, that is not that important."

Strong effects, Strack said, tend not to be that compelling.

"Innovation," he said, "runs the risk of nonreplication."