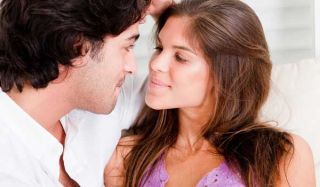 Falling in love can wreak havoc on your body. Your heart races, your tummy gets tied up in knots, and you're on an emotional roller coaster, feeling deliriously happy one minute and anxious and desperate the next.

Research shows that these intense, romantic feelings come from the brain.

In one small study, researchers looked at magnetic resonance images of the brains of 10 women and seven men who claimed to be deeply in love. The length of their relationships ranged from one month to less than two years. Participants were shown photographs of their beloved, and photos of a similar-looking person.

The brains of the smitten participants reacted to photos of their sweethearts, producing emotional responses in the same parts of the brain normally involved with motivation and reward.

"Intense passionate love uses the same system in the brain that gets activated when a person is addicted to drugs," said study co-author Arthur Aron, a psychologist at the State University of New York at Stony Brook.

In other words, you start to crave the person you're in love with like a drug.

Romantic love is a primitive response

Experts have said that romantic love is one of the most powerful emotions a person can have. Humans' brains have been wired to choose a mate, and we humans become motivated to win over that mate, sometimes going to extremes to get their attention and affection.

"You can feel happy when you're in love, but you can also feel anxious," said Aron's co-author, Lucy Brown, a neuroscientist at Albert Einstein College of Medicine in New York. "The other person becomes a goal in life," essentially, a prize.

"It helps us recognize when something feels good," she said.

The drive to feel good around your intended mate may even be more powerful than the drive for sex, Brown said.

Intense romantic love could fade away

But once you've won over your love, does the feeling fade away?

Not completely, Aron said. In another study, he and his colleagues looked at MRI scans of 10 women and seven men who were married for an average of 21 years and claimed they were still intensively in love with their partners.

The researchers found that in each of these long-term lovers, brain regions were also activated when they looked at photos of their partners. Long-term love showed activity in the regions linked with attachment and liking a reward.

"For most people, the standard pattern is a gradual decline of passionate love, but a growth in bonding," Aron said.

That bonding allows for the partners to stay together long enough to have and raise children.

"Most mammals don't raise children together, but humans do," he said.

But the brain studies did suggest that love changes over time, Aron said.

"As long as love remains, we get used to the relationship, and we're not afraid our partner will leave us, so we're not as focused on the craving," he said.

Pass it on: Brain, not the heart, plays a major role in falling in love.