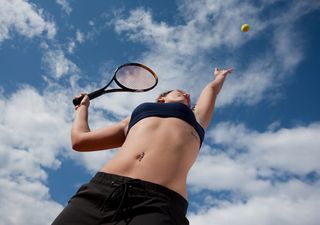 If you want a better workout, you may want to find a beau or a gal, a new study suggests.

Being in love enhances athletic performance, according to a new study of collegiate, professional and Olympic athletes.

More than half the athletes surveyed said being in love helped their game. Compassionate love, the type of affection and trust present in a long-lasting relationship, was more strongly associated with improved performance than passionate love, the feelings of euphoria and exhilaration experienced at the beginning of a relationship that usually fizzle within two years, the study said.

The results run counter to the idea that relationships distract or drain energy from us, the researchers said.

"Relationships, as long as they're loving and healthy and happy, tend to be positively influencing athletic performance," said study researcher Kelly Campbell, a psychologist at the University of California, San Bernardino. "They shouldn't be viewed in a negative light."

The findings were presented Aug. 7 at the American Psychological Association's annual meeting in Washington, D.C.

Brain scans of people in love show increased blood flow to regions of the brain associated with motivation. These same areas have been found to be activated in people, including athletes, who are intensely focused on pursuing a goal, Campbell said. But only one study had examined whether being in love affected athletic achievement.

The researchers provided the athletes with a definition of love, lest there be any confusion, and asked whether they had ever been in love, and if so, whether they thought their performance was better or worse because of it.

Fifty-five percent of athletes said they thought being in love enhanced their performance. Men were more likely than women to say being in love helped them in their sport.

The athletes' answers to open-ended questions suggested that those in compassionate relationships benefit because they feel they have a partner who can take care of everyday matters, including looking after children. Having a partner to help with household duties may free up more time to devote to their sport, Campbell said.

In addition, the feelings of euphoria experienced when we're in love may transfer to the sport, Campbell said.

Campbell hopes to do additional studies that objectively assess athletes' performance while they are in love. Such a study might ask athletes to look at a picture of their beloved while running on a treadmill, she said.

Pass it on: Athletes say being in love helps them in their sport.