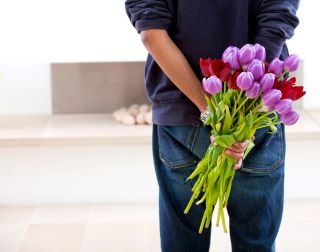 Generosity between spouses is a key element to a happy marriage, a new study says.

In essence, generosity is the amount of giving that goes on within a relationship, which can mean anything from making your spouse a cup of coffee, to ordering flowers or providing a backrub.

When a person is generous to his or her spouse, "The underlying message is, you're valuable, you're important," said Dr. Anthony Castro, an assistant professor of psychiatry at the University of Miami Miller School of Medicine, who was not involved in the study.

"What happens outside of the bedroom seems to matter a great deal in predicting how happy husbands and wives are with what happens in the bedroom," said study researcher W. Bradford Wilcox, an associate professor of sociology at the University of Virginia.

Predictors of a happy marriage

The study, part of the National Marriage Project,surveyed more than 1,400 heterosexual couples between the ages of 18 and 46.

Generosity works best if you give your spouse something he or she likes, Wilcox said. "[It's] signaling to your spouse that you know them, and are trying to do things for them that are consistent with your understanding of them," Wilcox said. But if, for example, your spouse delights in almond mochas, and you get her black coffee instead, it might not be very helpful, Wilcox said.

Based on the responses, the researchers compiled a list of the top five predictors of a very happy marriage. For men and women, sexual satisfaction ranked first, followed by level of commitment (a sense of "we-ness"), generosity and a positive attitude toward raising children. For women, the fifth factor was above-average social support from friends and family, and for men, the fifth factor was spirituality within a marriage.

Each relationship is unique

While the factors identified in this study may be a guide to a good relationship, they are based on responses from a large population and don't necessarily apply to individual couples, Castro said.

"Every individual situation is different," Castro said. For instance, a couple may find themselves falling into the 14 percent of couples who are very happy without a high level of generosity.

"Each specific relationship needs to be thought about individually, depending on both individual and partners' needs," Castro said.

The new study was conducted in partnership with the Center for Marriage and Families at the Institute for American Values, a nonprofit organization whose mission is to increase the proportion of U.S. children growing up with their two married parents.

Pass it on: Generosity is an important factor in a happy marriage.