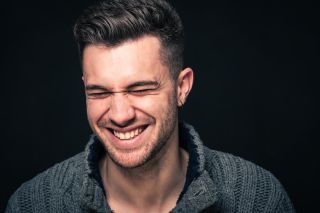 WASHINGTON — Where does humor come from in the brain? To find out, team of researchers scanned the brains of professional comedians to identify the brain activity involved in telling jokes.

Compared to regular people or amateurs, professional jokesters had more brain activity in regions involved in producing humor. But the comedians had less activity in regions linked to pleasure and enjoyment of humor, according to a study presented this weekend here at the 44th annual meeting of the Society for Neuroscience.

Many studies have investigated brain areas involved in humor perception, but none have looked at regions involved in humor production, said study researcher Ori Amir, a neuroscientist at the University of Southern California (USC). [The 7 Biggest Mysteries of the Human Body]

"In Los Angeles [where USC is located], we have a lot of professional comedians that can improvise on cue," Amir told Live Science. For the study, Amir and his colleague, neuroscientist Irving Biederman, recruited some of these professionals, as well as amateur comedians and regular people (to serve as controls).

The researchers put the volunteers in a magnetic resonance imaging (MRI) machine and showed them cartoon pictures with no captions. Each participant was then asked to write a humorous caption, a neutral caption that was not funny or no caption.

The brain scans revealed differencesin the "pleasure centers" of the brain, which are thought to be involved in appreciating humor — particularly the ventral striatum. Specifically, the control group showed the most activity in this region, followed by the amateur comedians and then professional comedians, who exhibited the least amount of striatum activity.

Not only that, but the activity in the pleasure centers died away more quickly in the brains of the professional comedians than in the brains of the other participants. Curiously, this dip in activity has also been linked to depression, Amir said — so perhaps there's some truth to the "sad clown" stereotype. Or, it could be that professional jokesters are just more adapted to funny things, Amir said.

But professional comedians showed the most activity in regions of the brain's temporal lobe, which is where the scientists think jokes are made. Individuals in the control group had the least amount of brain activity in the temporal lobe, the researchers said.

The scientists also had an independent group of people rate the funniness of the jokes, and found that funnier jokes were linked to more brain activity in the humor production areas of the study participants. In other words, "you amplify the activity, you amplify the funniness," Amir said.

The findings have not yet been published in a scientific journal.

Editor's Note: This article was updated at 10:02 a.m. ET December 1, 2014, to clarify which brain regions were activated by producing jokes and to include the name of another study co-author.