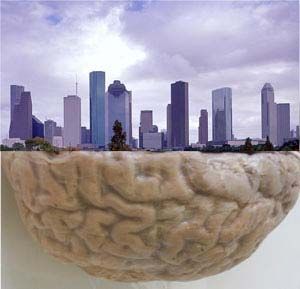 Brains and cities, as they get bigger, do so based on similar mathematical rules. Image
(Image: © Credit: Rensselaer/Mark Changizi)

A big city might seem chaotic, but somehow everything gets where it needs to go and the whole thing manages to function on most days, even if it all seems a little worse for the wear at the end of the day. Sound a bit like your brain?

Changizi and colleagues propose that cities and brains are organized similarly, and that the invisible hand of evolution has shaped the brain just as people have indirectly shaped cities. It's all driven by the need for organization and efficiency, the researchers say.

"Natural selection has passively guided the evolution of mammalian brains throughout time, just as politicians and entrepreneurs have indirectly shaped the organization of cities large and small," said Changizi, an assistant professor at Rensselaer Polytechnic Institute "It seems both of these invisible hands have arrived at a similar conclusion: brains and cities, as they grow larger, have to be similarly densely interconnected to function optimally."

There's some simple logic to the idea, and it's rooted in observations of real animal brains: As brains grow more complex from one species to the next, they change in structure and organization in order to achieve the right level of interconnectedness, the researchers argue. One couldn't simply grow a double-sized dog brain, for example, and expect it to have the same capabilities as a human brain. A human brain doesn't merely have more "dog neurons," but, instead, has neurons with a greater number of synapses than that of a dog — something crucial in helping to keep the human brain well connected.

To draw a crude analogy, you don't just take small-town streets and build a city out of them. You need wider streets, more stoplights, and so on.

Or as Changizi puts it, you can't string three Seattles together to get a Chicago; there would be too many highways with too few exits and lanes that are too narrow.

In doing the math, the researchers found common "scaling laws" for brains and cities on several measures. For example, as the surface area of a brain or city grows, the number of connectors (neurons or highways) increased at a similar rate for each. Likewise, a bigger city needs more highway exits in the same proportion as a bigger brain needs more synapses, the things that connect neurons.

"When scaling up in size and function, both cities and brains seem to follow similar empirical laws," Changizi said. "They have to efficiently maintain a fixed level of connectedness, independent of the physical size of the brain or city, in order to work properly." The findings are detailed this week in the journal Complexity.