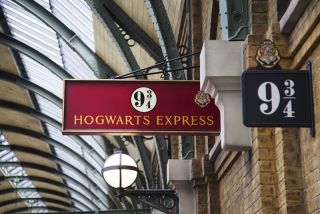 If you spend your time daydreaming about attending Hogwarts or wishing you could join Harry Potter's squad, Google may have something that will brighten your day … literally. You can now cast a "spell" — the same way wizards and witches in Potter's world wield their wands — to turn your smartphone's flashlight on and off.

The good news? It's so easy even muggles can do it. The bad news? You have to have an Android phone.

To cast a spell, users can say "Ok Google," and then "Lumos" to turn the phone's flashlight on, or "Nox" to turn the flashlight off. Wannabe wizards can also use the command "Silencio" to silence the phone's ringer and notifications, David Blanar, who christened himself Google's "apprentice magizoologist," wrote in a blog post on the company's website.

This magical update is part of a promotion with Warner Bros. Pictures for the upcoming film "Fantastic Beasts and Where to Find Them," which debuts Nov. 18 in theaters in the United States. [Now You See It: 6 Tales of Invisibility in Pop Culture]

The film is set in the same world created by author J.K. Rowling for the "Harry Potter" books and films, but the storyline occurs decades before Potter begins his wizarding adventures. The plot revolves around the character Newt Scamander, a so-called magizoologist in New York in the 1920s.

Android owners can explore Scamander's world with Google Street View, which features scenes from New York in 1926 as they appear in the film, with comparisons to how these spots look today. Fans of "Fantastic Beasts" can even visit specific locations from the film, according to Google.

And using the company's new virtual-reality headset, dubbed Daydream View, users will be able to wave a wand to further explore Scamander's world in virtual reality and help the intrepid magizoologist locate his escaped beasts, Blanar wrote. DayDream View is currently available for pre-order and is slated to be available on Nov. 10.

More information about these fun features is available on Google's "Fantastic Beasts" site.