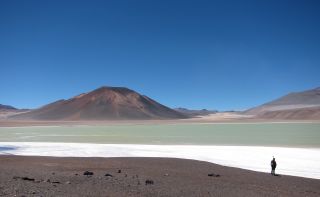 A massive magma chamber in South America that pumps melted rock into the Earth's crust created an enormous dome in the central Andes, within the second-highest continental plateau in the world, according to a new study.

Researchers studying the seismology and topography of the Altiplano-Puna plateau have connected the existence of a huge, underlying magma body to the plateau's great heights. The Altiplano-Puna plateau, which has an altitude of 13,000 feet (4,000 meters), includes parts of Argentina, Bolivia and Chile, and encompasses vast plains punctuated by volcanoes.

The study reveals how magma that was injected into the crust from below contributed to the plateau's uplift, and it offers insight into the creation of continental crust as well as the region's supervolcanoes — massive volcanic centers that are capable of producing volcanic eruptions that are thousands of times larger than normal eruptions. [The 11 Biggest Volcanic Eruptions in History]

Study author Jonathan Perkins, who led the research as a graduate student at the University of California, Santa Cruz, and is now a researcher at the U.S. Geological Survey, explained that the Altiplano-Puna plateau's unique plate tectonics are what drew scientists to study it. The Andes were formed from a subduction zone, when two tectonic plates collided and one plate sank into the mantle underneath the other plate.

"The plateau is the second-largest continental plateau in the world," Perkins told Live Science. "The biggest is the Tibetan plateau, but the Tibetan plateau formed from two continents crashing into each other, whereas the Andes formed in a volcanic arc, which is a subduction zone, so there the whole plate tectonic configuration is different."

Traditional tectonic models could not account for the entire thickness of the crust beneath the plateau. To determine the source of the plateau's height, Perkins and his team combined seismological and topographical studies of the area.

Using the seismological research of the magma body — which is more like a mush of crystals with some liquefied areas versus an ocean of molten magma — the researchers were able to determine the magma body's size, but not its connection to the plateau.

"We analyzed the topography in that area and found this big dome in the plateau," Perkins said. "By doing some topographic filtering techniques, we were able to show that this large zone of uplifted topography correlates really well with where we see the magma body."

About 3,300 feet (1 kilometers) high and hundreds of miles across, the dome's uplift from the magma chamber beneath accounts for about one-fifth of the height of the central Andes, the researchers found. [Photo Timeline: How the Earth Formed]

In these volcanic arcs, the subduction zones are like the factories of continental crust, Perkins said. The big magma bodies make rocks that are seen in the continents today. While much of the continental growth occurred millions of years ago, when such magma chambers underwent a period of rapid melt generation called a magmatic flare-up, Perkins said that the chamber beneath the Altiplano-Puna plateau is still active.

"What’s really neat about this area of the central Andes is that it's one of the only places we know of in the world right now that’s actively undergoing one of these flare-ups," Perkins said. "So we’re using the topography and seismology in tandem to sort of get a real-time view about how fast magma gets pumped into the crust, creating new continental crust during one of these big flare-up events."

The activity of the magma chamber that was determined in this study can also be connected to research on the area's supervolcanoes, which have been relatively inactive in the last 3 million years.

Perkins explained that this massive magma body is a sort of "mother chamber," in that its magma is genetically related to the supervolcanoes that have been created over the past 10 million years.

"We know that this magma body is still active, but we can’t tell from the data whether or not this flare-up is actively ending, or if it's just a lull and there could be another pulse that triggers supervolcano activity," Perkins said. "But, it doesn’t look like there’s evidence for any potential supereruptions right now."

The study was published online Oct. 25 in the journal Nature Communications.