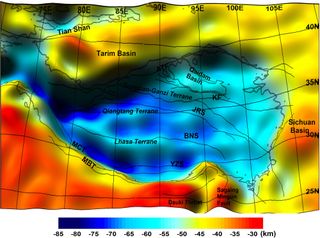 This shaded relief map shows the rock deep beneath the Tibetan Plateau, with colors indicating kilometers below Earth's surface.
(Image: © Image by Younghong Shin of the Korea Institute of Geosciences and Mineral Resource, courtesy of The Ohio State University.)

A new glimpse into the boundary between the Earth's mantle and its crust, located up to 50 miles (82 kilometers) below the surface comes from a surprising source — space.

Satellite measurements have provided a new view of the Moho under the Tibetan Plateau, where the Indian plate is violently butting into and diving beneath the Eurasian plate. The Moho, short for Mohorovičić (the Croatian seismologist who discovered it), is the layer at the deepest edge of Earth's light crust, before the mantle's dense, flowing, soft rock. Below continents, the Moho is usually found about 21 miles (35 km) down from the surface. But at the Tibetan Plateau, where the crust is particularly thick, the Moho is found 40 miles (65 km) down; at the western part of the plateau, it dives as far as 50.9 miles (82 km) deep.

The new data also shows that the Moho under the plateau is not a flat layer, but is rucked into a series of bumps and troughs, like a kicked-up rug. [High & Dry: Images of the Himalayas and the Tibetan Plateau]

"It could be said that the Moho topography holds the geohistory of the region like the formation of folded mountains," study researcher Young Hong Shin of the Korea Institute of Geosciences and Mineral Resource told Live Science.

Shin and his team used eyes in the sky to delve into the Moho's secrets. Scientists tried to drill down to the Moho from the seafloor, where the crust is thinnest, in a project dubbed "Project Mohole" between 1958 and 1966.]The effort unfortunately failed, though it did sample the second layer of the Earth's crust for the first time, according to the National Academies of Science.

More recently, the International Ocean Discovery Program (IODP) has declared its intentions to try to reach the Moho again with the Japanese research vessel "Chikyu." However, maintenance issues with the vessel mean that seafloor drilling with the ship will not resume until 2016, according to the IODP.

Fortunately, satellites can give scientists a good view of deep structures. The researchers have used two satellite missions: NASA's Gravity Recovery and Climate Experiment, or GRACE, and the European Space Agency's Gravity field and steady-state Ocean Circulation Explorer, or GOCE. With these satellites, researchers were able to detect small changes in the force of gravity caused by the Earth's topography and varying density.

Based on these gravity measurements, the team then created a virtual model of the Moho under the Tibetan Plateau.

They found that the pressure of the Indian plate pressing into the Eurasian plate buckles the crust, forcing it to climb up (creating the Himalaya mountains) or dive down (becoming the base of the thick Tibetan Plateau). This pattern matches records made by GPS devices that measure the movement of the Earth in the region, Shin said.

The Himalayan region is famously the site of seismic activity, such as the magnitude-7.8 earthquake that struck Nepal in April 2015. The new research won't lend itself to anything as straightforward as earthquake predictions, Shin said. What it can do, he said, is reveal the deformities of the crust, helping to elucidate how the plate collision works. The mechanisms don't just affect earthquake hazards, but also the long-term building of mountains and basins.

"In the near future, we'll submit an improved model covering up to [the] upper crust," Shin said. That model should provide something of a backdrop of the region's tectonics, helping to describe the stage upon which earthquakes are set, he said.

The researchers reported their findings in the journal Scientific Reports.