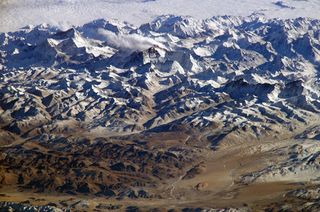 Astronauts on board the International Space Station photographed the Himalayas, looking south from over the Tibetan Plateau, showing the summits of Makalu (left) and Everest (right).
(Image: © NASA)

The incredible energy unleashed by the magnitude-7.8 earthquake that hit Nepal on April 25 moved Mount Everest more than an inch.

The world's tallest mountain shifted 1.18 inches (3 centimeters) to the southwest during the quake, according to the state-run China Daily newspaper, which cited a new report by China's National Administration of Surveying, Mapping and Geoinformation.

The shift was a small leap back for the mountain, which has been creeping northeastward at a rate of about 1.5 inches (4 cm) a year, the agency reported. The mountain also rises about 0.1 inch (0.3 cm) each year. This motion is caused by the slow, grinding collision of the Indian and Eurasian tectonic plates, which pushes the ground upward. [See Images of the Odd Effects of the Nepal Earthquake]

"Everest is kind of like a distraction from the whole story," said Richard Briggs, a geologist at the U.S. Geological Survey (USGS) in Golden, Colorado.

Near Kathmandu, the quake lifted the ground by about 3 feet (1 meter), according to preliminary data from Europe's Sentinel-1A radar satellite. Damage from the quake covered more than 5,600 square miles (over 14,000 square kilometers). More than 8,000 people died.

The earthquake deformed the ground into a sort of a welt, Briggs told Live Science. Areas above the slipping fault, where the stress of the continental collision finally gave, pushed upward. This happened, for example, to Kathmandu. Meanwhile, farther north, behind the fault slip, the ground abruptly dropped.

"Everest is way out on the edge of that possible downward trough," Briggs said. Preliminary satellite data from Sentinal-1A had suggested the mountain dropped an inch (2.5 cm) during the quake, but the Chinese agency reported no loss of height. Everest aside, the Himalayas were undeniably affected, Briggs said: About 60 miles (100 km) of mountain range north of Kathmandu dropped significantly.

"What moved this time was closer to Kathmandu," Briggs said. "And those peaks, which are just a little bit smaller than Everest, moved over half a meter [more than 1.6 feet]."

A 7.3-magnitude aftershock rocked the region on May 12, triggering new landslides and killing dozens of people. That aftershock did not shift Everest, according to China's mapping agency. Hundreds of smaller aftershocks have continued in the region, according to the USGS.

The quakes in Nepal are not unusual, geologically speaking. According to the USGS, the Indian plate is crunching into the Eurasian plate at a rate of 45 millimeters (1.8 inches) per year. The Indian plate slides under the Eurasian plate at a very shallow angle, Briggs said. The arrangement is similar to the undersea subduction zones off of Alaska and Japan, where one continental plate pushes under another. Lessons from those regions, as well as geological evidence of past quakes in the Himalayas, reveal that the fault is capable of quakes larger than magnitude 7.8, Briggs said. [In Photos: Hiking the Himalayas]

It's impossible, however, to predict when such a quake might occur, or whether April's quake influenced the chances of a later temblor.

"Movement on this fault will have affected nearby faults, and some of the faults will be promoted closer to failure [causing a quake], and some will be pulled farther away from failure," Briggs said. "The trouble we have is the timing part. We don't know where all these faults are in their kind of 'clocks' and how close they were to kind of going anyway."

Complicating the guessing game is the lack of geological evidence. The type of quake that shook Nepal doesn't necessarily leave a strong trace in the rock record, Briggs said. Imagine a hand pushing on a metal ruler until the instrument bows. When the ruler finally springs back against the pressure, as the Eurasian plate did against the pressure of the Indian plate, it changes shape. But the overarching pressure of the hand (or Indian plate, in this case) continues, deforming the ruler back into its bowed shape.

"Kathmandu is going to go down, and it's going to move back in the direction of Asia, and the Himalaya [region] is going to come back up," Briggs said. The changes in the Earth are elastic, he said, and "they're mostly canceled out in between the big earthquakes."

The quake was also what is known as a "blind rupture," meaning there was no visible fault line or cracking at the surface. That makes it harder to see how many times such a quake has happened before, and how likely it is to happen again.