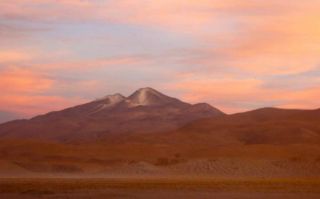 Sunset at Uturuncu, a growing volcano that is surrounded by ancient supervolcanoes.
(Image: © Jonathan Perkins.)

A doomsday volcanic eruption with the power to wipe out civilization may sound like the premise for a bad movie, but so-called supervolcanoes are far from fictional. And now scientists are warning that supervolcanoes require far less time to build up the ammunition for a cataclysmic eruption than once thought.

However, this newly discovered "short fuse" must be put in context: The buildup of a supervolcano toward eruption still may take several hundred or thousands of years.

There are quite a few supervolcanoes around the world, from the one in Yellowstone Park to what could be a new supervolcano in Bolivia. While none of them appears primed for an eruption, understanding their behavior illuminates Earth's past and gives a better picture of the danger they pose.

Previous studies indicated that supervolcanoes — volcanoes that spew out roughly 1,000 times more material than Mount St. Helens did in 1980 — need 100,000 to 200,000 years to build up a reservoir of magma before they can unleash a violent eruption.

Yet research published today (May 30) in the journal PLoS ONE suggests that these giant magma pools, typically 10 to 25 miles (16 to 40 kilometers) across, exist for only a few thousand to even just a few hundred years before a supervolcano goes off.

"Our study suggests that when these exceptionally large magma pools form, they are ephemeral and cannot exist very long without erupting," Guilherme Gualda, an assistant professor of earth and environmental sciences at Vanderbilt University, said in a statement.

Gualda and colleagues studied Bishop Tuff, a plateau in California that is essentially the remains of a supervolcano that erupted about 760,000 years ago. They used a dating technique that looked at the rate of quartz crystallization — as opposed to a more traditional method that uses the decay of elements such as uranium and thorium in zircon crystals — to determine the lifespan of the magma pool that sparked the massive eruption.

The study yielded compelling evidence that the magma pool may have formed in 10,000 years — and most likely formed in as little as 500 to 3,000 years.

Gualda said that means the world's supervolcanoes may bear closer scrutiny than they now receive. "The fact that the process of magma body formation occurs in historical time, instead of geological time, completely changes the nature of the problem," he said. [10 Wild Volcano Facts]

The most recent super-eruption occurred at Taupo in New Zealand, about 26,000 years ago; the most dramatic to occur while humans walked the Earth happened 74,000 years ago, in Indonesia, when an eruption at Mount Toba rained ash all over South Asia and filled the atmosphere with so great a load of ash and small particles that it altered global weather for as long as a decade.

There are indications that the eruption took a devastating toll on the world's human population.