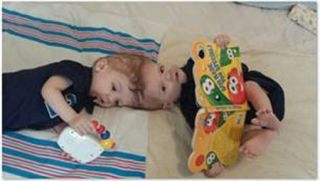 An image of conjoined twins Jadon and Anias McDonald, who successfully separated after an extensive surgery.
(Image: © Children’s Hospital at Montefiore )

Twin boys who were born joined at the head are now successfully separated after they underwent a rare surgery that took more than 20 hours, doctors announced today.

The 13-month-old boys, Jadon and Anias McDonald, were born with a condition called craniopagus, which means they shared a portion of their skull and brain tissue.

The surgery to separate the twins required a team of 40 experts, and finished at 2:15 a.m. today (Oct. 14), according to a statement from Children's Hospital at Montefiore in New York, where the surgery was performed. [Seeing Double: 8 Fascinating Facts About Twins]

"Well, we did it," Dr. James Goodrich, a pediatric neurosurgeon who led the surgery, told CNN.

Conjoined twins are identical twins who are physically connected. Normally, identical twins form when an embryo splits in two shortly after fertilization. But with conjoined twins, this separation process stops before it is completed, according to the University of Maryland Medical Center.

The embryos of identical twins start to separate around eight to 12 days after forming. It's thought that if this separation process starts later than this, between 13 and 15 days after fertilization, it results in conjoined twins, according to the Mayo Clinic.

There is also a theory that conjoined twins can result from an egg that first splits completely, but then joins back together, according to Seattle Children's Hospital.

Conjoined twins occur in about one out of every 200,000 live births, and many do not survive the first day of life, the University of Maryland says. Researchers estimate that 40 to 60 percent of conjoined twins are stillborn.

Craniopagus twins are rare, making up only 2 percent of conjoined twin cases, the University of Maryland says. The craniopagus-separation surgery performed on the McDonald twins was the 59th such surgery in the world since 1952, according to CNN.

The twins still face "a long road of recovery and rehabilitation," the Montefiore statement said.

"We are standing on the brink of a vast unknown," Nicole McDonald, mother of the twins, wrote on her Facebook page. "The next few months will be critical in terms of recovery and we will not know for sure how Anias and Jadon are recovering for many weeks."