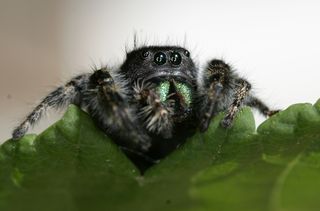 When Peter Parker's "spidey sense" starts tingling, it's warning him about danger nearby. Real spiders are known for their ability to detect close-up threats, but a new study suggests that they can also sense sounds that are much farther away.

Tiny jumping spiders, which depend primarily on their vision to catch prey and evade predators, were thought to be capable of sensing only the sounds produced nearby, the study authors wrote.

But the researchers found that the spiders could also sense and respond to sounds coming from distances more than 9.8 feet (3 meters) away — no small feat for a creature that measures just 0.04 to 0.98 inches (1 to 25 millimeters) and lacks ears and eardrums. [Creepy, Crawly and Incredible: Photos of Spiders]

"Hearing in spiders is really different from the way that our own ears work," study lead author Paul Shamble, a biologist who conducted jumping-spider research with colleagues at Cornell University but is now at Harvard University, told Live Science.

"Instead of eardrums that respond to pressure, spiders have these extraordinarily sensitive hairs that respond to the actual movement of air particles around them," Shamble told Live Science. "Though they differ in size and number, these specialized 'hearing' hairs are found across virtually all spider species."

Shamble and his colleagues discovered by chance that this "hearing" was even more sensitive than anyone suspected.

The researchers wired a jumping spider's brain with electrodes — a technique that Shamble helped to pioneer at Cornell in 2014 — to record how the spiders processed visual signals. And then something unusual occurred.

Shamble recalled in a statement that the researchers had set up a speaker so they could hear when the spider's neurons fired, which produced a distinctive popping sound. As one of the scientists moved away from the table, his chair squeaked — and they heard the sound of the spider's neuron firing.

"He did it again, and the neuron fired again," Shamble said.

This was surprising, Shamble explained, because in behavioral experiments with other jumping spiders, once objects moved about 12 inches (30 centimeters) away, the spiders seemed to stop responding to them. [Weird and Wonderful: 9 Bizarre Spiders]

"Also, until now, most biologists relied on a set of simplifying assumptions to understand how creatures like this could respond to sounds," Shamble added. "Those assumptions suggested that if you were more than about a meter [3 feet] away from the sound source, the signal would be so small that it would be undetectable. Since this matched the behavior that people had observed, this seemed to work."

However, a jumping spider in a Cornell laboratory was proving those assumptions wrong. Shamble clapped his hands near the spider. The neuron fired. And it kept firing in response to his clapping, even after he had moved outside the room, to a distance of 16 feet (5 m) from the spider.

The researchers conducted further tests and found that touching the sensory hairs on jumping spiders' forelegs triggered the neurons that responded to sounds, suggesting that these hairs were picking up audio signals even over distances of several meters.

"This brings up all kinds of new ideas and questions — from what might they be using this hearing for, to the neurobiology of how they process all this information," Shamble said. "Just imagine if you assumed that cats could not hear, and then one day you found out that they could — it would change everything about how you thought about their lives!"

As to what comes next — you could say that the scientists who study these spiders will be all ears.

The findings were published online Oct. 13 in the journal Current Biology.