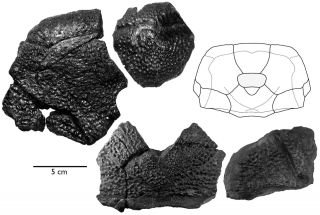 Fossil bones from the skull of Bothriolepis rex include large, thick bones that created an armor with a single opening for the eyes.
(Image: © Photo by Valentina Garcia, drawing by Jason Downs)

Before T. rex there was B. rex, a giant armored fish that was "king" long before the dinosaurs, according to a new study.

A team of scientists discovered the fossils of Bothriolepis rex, a new giant in the group Antiarchi — ancient fish with armored plates covering their head, shoulders and front fins. The new rex, Latin for "king," was identified from 370-million-year-old fossils that werefirst discovered in 2000 near Okse Bay in Nunavut, Canada.

The scientists estimate that B. rex was about 5.5 feet long (1.7 meters), making it 30 percent longer than the previous king of the antiarchs. B. rex would have lived along ancient ocean floors during the Devonian period, a time predating most dinosaurs by hundreds of millions of years, the researchers said. [Image Gallery: 25 Amazing Ancient Beasts]

"Bothriolepis rex extends the range of known body sizes for the group Antiarchi," Jason Downs, a research associate at the Academy of Natural Sciences of Drexel University, in Philadelphia, and an assistant professor at Delaware Valley University in Doylestown, Pennsylvania, said in a statement. "The large body size and the thick, dense armor present a unique opportunity to address questions about the lifestyle of this unusual group of armored swimmers."

Armor-like plates along B. rex's head and upper body were likely used to defend the creatures from the "stabbing bites of large sarcopterygians," predatory fish from the same time period, the researchers said. The skull also indicates a bottom-feeding lifestyle, as the mouth is on the lower surface of the ancient fish's head. In fact, the heavy armored bones could have also solved buoyancy issues for the bottom-dwelling fish, they added.

With defensive armor and a bottom-dwelling existence, B. rex likely did not share T. rex's famous ferocity, according to the researchers. Despite the ancient fish's size, Downs said B. rex was not equipped to actively prey on other sea creatures.

It actually may have been B. rex's size that led to the ancient king's downfall.

"All antiarchs are extinct by the end of the Devonian period," Downs said. "We can't know exactly why B. rex went extinct, but large-bodied species are often found to be at a higher risk of extinction than small-bodied ones."

The new study describing B. rex was published online Oct. 7 in the Journal of Vertebrate Paleontology.