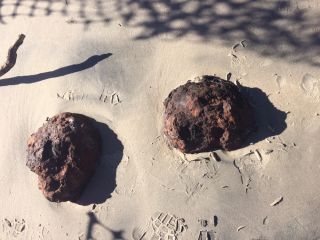 A pile of Civil War-era cannonballs was uncovered by Hurricane Matthew after it lashed South Carolina with strong waves and high winds over the weekend. But rather than preserve the artifacts, authorities have destroyed most of the historic weapons for safety reasons, according to the Folly Beach Police Department.

A day after the hurricane blasted the state's coastline, on Sunday (Oct. 9), a resident walking along the east end of Folly Island — a coastal region about 10 miles (16 kilometers) south of Charleston that's known for its history of pirates and Civil War battles — spotted a pile of 16 corroded ordnances resting on the sand, said Folly Beach Chief Andrew Gilreath, director of public safety. The resident contacted the authorities, who came to assess the situation, he said.

The hurricane's waves and winds likely eroded parts of the beach to uncover the bowling-ball-size weapons, Gilreath said. One of the cannonballs even had a visible fuse hole in the shape of a cylindrical notch, where a timed fuse would have been placed, he added. [Hurricane Matthew Photos: See How the Monster Storm Evolved]

"Initially, the city wished to display them," Gilreath told Live Science in an email. "However, they were inspected and a large number of them were [found to be] explosive cannonballs, and thus contained old and very unstable gunpowder."

It's a common misconception that cannonballs are merely large steel balls, he said. "While that is the case sometimes, there are also explosive and incendiary types, which are very unsafe," Gilreath said.

After this realization, authorities decided to destroy the cannonballs. According to a tweet from the Charleston County Sherriff's Office (CCSO), local officials worked with the U.S. Air Force Explosive Team to destroy the ordnances.

They didn't destroy all of the cannonballs, according to a CCSO tweet: "UPDATE: Folly Beach ordnance detonation successfully completed. Small amount will be transported to Navy Base #chsnews."

LowCountry CW, a Charleston news network, warned that "Residents in Charleston, James Island, and on Folly Beach may hear what will sound like an explosion, here's why: #chsnews."

One of Folly's historical Civil War moments was portrayed in the popular 1989 movie "Glory," which tells the story of a military unit comprised of all-black volunteers fighting for the Union. The battle portrayed in the movie was fought on and around Folly at Fort Wagner, "which is more than likely what this artillery was used to fire upon," Gilreath said of the pile of cannonballs.