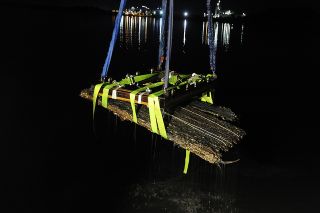 The armored husk of a Confederate warship is being raised out of the depths of a Georgia river, 150 years after the ship's crew deliberately sunk it.

Crews are raising the Civil War-era ship's remains in 10,000-lb. (4,500 kg) chunks that measure about 4 feet tall by 24 feet wide (1.2 by 7.3 meters). The siding is the last major ship part remaining in the water; Navy divers began retrieving the ship's unexploded shells, cannons and other artifacts in late June. [See photos of the CSS Georgia's recovery]

"The historical significance is evident in everything we do," Jason Potts, the U.S. Navy's on-scene commander, said on Aug. 12, the Associated Press reported.

Officials decided to remove the sunken ship before the start of a joint state and federal project to deepen the Savannah River's shipping channel from 42 feet to 47 feet (12.8 to 14.3 m). The channel deepening will allow giant cargo shipsto more easily enter the Savannah port, according to the United States Army Corps of Engineers.

The ironclad gunboat owes its existence to the so-called Ladies Gunboat Society in Savannah, which was made up of a group of merchants' wives, among other like-minded women, who raised funds from across the state to build the warship.

The CSS Georgia was built for the Confederacy in 1862, but it ended up being too heavy to be powered under its own steam through the tidal waters of the Savannah River. Consequently, the vessel became a floating battery anchored upstream, helping to protect the city of Savannah from the Union's navy.

The CSS Georgia spent only three years floating before it was banished to the bottom of the river. When Union Gen. William T. Sherman approached in 1864, the Confederate troops decided to sink the CSS Georgia rather than see it usurped by their enemy.

More than 150 years later, archaeologists are examining sections of the 1,200-ton frame to learn how the Confederacy managed to build ships and other war machines without an industrial base.

"A lot of these ironcladsare built by house carpenters; they're not built by shipwrights," Jeff Seymour, a historian and curator for the National Civil War Naval Museum in Columbus, Georgia, told the AP. "So what are the construction techniques? They vary from ship to ship."

Underwater archaeologists prepared the ship prior to its extraction, and Navy divers raised 132 unexploded cannonballs and rifled shells that were scattered across the wreckage site. The divers also recovered four cannons weighing 1,000 to 10,000 lbs. (450 to 4,500 kg) each.

A flywheel, a pump, sections of the steamship's boiler and the ship's intact propeller were also recovered, according to the AP.

"We don't just simply want to bring it all back to the surface," Potts said. "We want to bring it back intact, so we go to the maximum effort to make sure we don't rip these things apart on the way up."