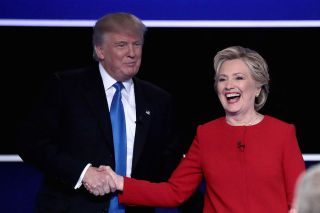 Donald Trump is threatening to dredge up former President Bill Clinton's past infidelities in his next debate with Hillary Clinton. The Republican nominee has also accused Hillary Clinton of being unfaithful to her husband, The Washington Post reported.

"I don't even think she's loyal to Bill, if you want to know the truth," Trump said at a rally in Pennsylvania on Oct. 1, according to The Washington Post.

Defending Trump's comments, former New York City mayor Rudy Giuliani said on NBC's 'Meet the Press' that "everybody" has their own infidelities. [The Science of Breakups: 7 Facts About Splitsville]

But does everybody actually cheat?

No, it's "not true" that everybody cheats, said Nicholas Wolfinger, a professor of family and consumer studies at the University of Utah.

Rather, research from the past two decades shows that between 20 and 25 percent of married men cheat and between 10 and 15 percent of married women cheat, Wolfinger told Live Science. And those numbers have stayed pretty consistent over that time period, he added.

Kassia Wosick, a research affiliate at New Mexico State University and an assistant professor of sociology at El Camino College in Torrance, California, agreed that the majority of scientific studies show that the rates of cheating hover around 20 percent.

Overall, surveys have shown that rates of cheating haven't changed too much in the past few decades, Wosick told Live Science. She noted, however, that there will be an occasional study that suggests that rates are higher, perhaps around 40 percent.

But what does appear to have changed is people's attitudes toward cheating.

People disapprove of infidelity more now than they did several decades ago, Wolfinger said.

Part of this reason for this change is that people's views about marriage have also changed.

Marriage means something different today than it did several decades ago, said Christin Munsch, an assistant professor of sociology at the University of Connecticut.

In surveys from the 1970s, it was much more common for people to accept that their spouse cheated, Munsch told Live Science. They weren't looking for their partner to be their best friend, their confidante and also an amazing lover like people do today, she said.

But people today expect to get everything from a relationship with a spouse, and they have really strong opinions about cheating, Munsch added. These days, people get "more incensed" at the idea of affairs, Munsch said. [8 Myths That Could Kill Your Relationship]

Attitudes about sex have also changed.

People now think about sex differently and they define sex in different ways, Wosick said. There may be a wider range of behaviors that people engage in and don't consider cheating, she said. So it's possible that more people are cheating today, but they don't think of it as such, she said.

Indeed, it can be difficult for researchers to define infidelity.

Not every person defines infidelity the same way, Munsch said. Does only sexual intercourse count? What about kissing, or flirting online? Another problem, of course, is that people lie, she said.