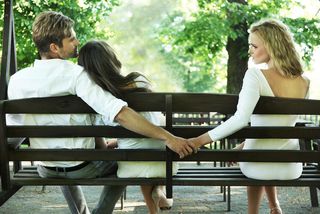 You may think that bringing home the bacon would earn you some respect from your spouse, but a new study finds the opposite: Spouses who are economically dependent on a breadwinner are more likely to cheat than those in financially equitable relationships.

This link between dependency and infidelity occurred in both genders but was strongest for men, perhaps because dependent men feel that their masculinity is threatened, said study leader Christin Munsch, a sociologist at the University of Connecticut. In fact, the idea for the study came about when she was talking with a male friend of hers who had cheated on his financially successful wife, Munsch told Live Science.

"He felt like his partner had all the friends, all the money, all the success, because this person wasn't working, and his wife was," Munsch said.

To find out whether her friend's motivations were common, Munsch gathered data from the National Longitudinal Survey of Youth, a nationally representative data set of people who were between 12 and 16 years old as of December 1996. She used data from 2001 to 2011, so that all of the participants in the study were 18 to 32 years old when the data was collected.

This group included 2,757 people who had been in a heterosexual marraige for at least one year. The survey didn't ask specifically about infidelity, but Munsch ferreted out cheaters based on their answers to two questions: One, whether they'd had sex with a stranger during the past year, and two, whether they'd had more than one sexual partner in the last year. This method isn't perfect, Munsch said — there might be some cheaters missed because their marriages lasted less than a year, or some people in open relationships unfairly classified as cheaters — but those people are probably rare outliers. [I Don't: 5 Myths About Marriage]

For both men and women, dependency bred infidelity, Munsch reported today (June 1) in the journal American Sociological Review. For example, the women in the study who brought home no income had about a 5 percent chance of cheating in any given year, whereas women who were breadwinners almost never cheated.

It may be that for women, earning an income also brings a greater desire to keep the relationship healthy. "I think they're engaging in behaviors designed to keep that relationship intact," Munsch said.

In earlier studies, female breadwinners report shouldering more chores than their partner at home, compared with women who are dependent or women who are in equal-earner relationships, Munsch said. In the same way, women who hold the breadwinner role may avoid infidelity at all costs.

For males, the relationship between money and fidelity looks like a skewed letter U: Men had a higher chance of cheating if they were earning either much more or much less than their partners, whereas those in the middle had a lower chance of being unfaithful.

The chance of cheating by men dipped for relationships in which the partners were more financially equal. Men who made about 70 percent of the total household income were least likely to cheat, Munsch said.

Munsch controlled for outside factors that could influence cheating, including hours worked per week, race, age, religious attendance and number of children. She also found that neither relationship satisfaction nor conflict could explain the different levels of cheating she observed.

Notably, the long-term design of the survey let Munsch compare the same people to themselves over time. She found that in years when the female half of the couple made more, men were more likely to cheat. When men's earnings went up relative to their wives', they became less likely to cheat. Similarly, women's likelihood of committing infidelity changed with their relative earnings.

That means there is likely a cause-and-effect relationship between money and infidelity, Munsch said, although further research is needed to confirm this idea. Someone's personality usually stays stable year after year, but their chance of cheating changes as their earnings change.

The paper debunks the notion that a family structure that includes a single breadwinner is best for family life, Munsch said. In general, people are uncomfortable in unequal relationships, she said.

"What this shows is that when both partners are working and contributing to the household, families are more stable," she said. But marriage-minded people should beware of making any life-altering decisions based on the data, she warned. For one thing, cheating is relatively rare even in the worst-case scenarios: Most (85 percent) of dependent men are faithful. And the results can be generalized only to Americans under age 32, as that was the group surveyed.

The best bet, Munsch said, is to worry less about the numbers flowing into the bank account, and more about cultivating a supportive and noncompetitive relationship.

"I think the more important thing to do is marry somebody who is really secure in their masculinity or femininity, and their career," she said. "We probably shouldn't marry people where so much of their identity is based on being better than you."