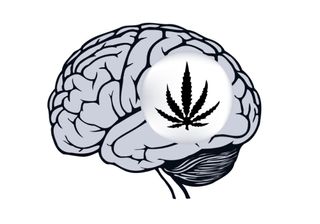 Heavy marijuana use over a long period of time may severely damage the brain, according to a new review of previous research.

In the review, the researchers also described the case of a 52-year-old man who died after using marijuana. The man, who had previously had depression, died from injuries he sustained when he jumped in front of a car after smoking pot and losing touch with reality. An analysis of the man's brain revealed severe damage that doctors attributed to the man's heavy marijuana use over the two decades prior to his death.

"When we looked at the brain, it had horrible degenerative changes," said Dr. Suzanne M. de la Monte, a professor of neurosurgery at Brown University in Providence, Rhode Island, who co-authored the review and examined the man's brain after his death. [7 Ways Marijuana May Affect the Brain]

The researchers said they don't know exactly how much marijuana the man used in the years before his death. But blood tests conducted on several occasions before the man was admitted to the hospital the last time showed high levels of marijuana compounds, de la Monte told Live Science. Moreover, both the patient and his family told doctors about the man's heavy marijuana use, de la Monte said. People who use marijuana at lower levels may not suffer such drastic consequences.

This case and other research cited in the review suggest that chronic, heavy marijuana use may cause cognitive impairment and brain damage, the researchers wrote in their review, published in the journal Pediatric Neurology.

The research may also hold clues about how marijuana may affect the brain in people who use the drug in other ways, de la Monte said. "We are mostly worried about people who are young and whose brains are developing," she said. The brains of children and teens are particularly vulnerable to the damaging effects of marijuana, she added.

The man whose case was described in the review had experienced several episodes of behavior that indicated he had lost touch with reality, the study said. Those episodes occurred specifically after the man smoked marijuana, and therefore the researchers said they think that use of the drug triggered the episodes. Previous research has also linked marijuana use with an increased risk of such behavior, the researchers said.

When the man was admitted to the hospital after the accident, a blood test revealed high levels of THC, marijuana's main psychoactive component. The man died a few days later from his injuries.

Afterward, the researchers found damage in several of the man's brain regions, including tissues deep inside the brain and nerve fibers in the brain. "The injuries in his brain that were most revealing were older than anything that could have occurred as a result of his accident," de la Monte said.

Because the man did not have a brain-damaging disease such as Alzheimer's and did not drink alcohol or use any other substances known to cause brain damage, the researchers pointed to his heavy marijuana use as the most likely cause of the brain damage.

Previous research on the brains of heavy marijuana users has also shown patterns of brain damage that were similar to the pattern observed in this case, the researchers said.

However, because the new report involved only one person who had used significant amounts of marijuana before death, it is not possible to determine whether other marijuana users would also experience the effects seen in this patient, the researchers said.

The results of the new report and previous findings on marijuana's effects on the brain are particularly concerning as marijuana continues to be legalized for medical uses, the researchers said.

Marijuana plants cultivated today are different from those cultivated even just 10 years ago, because today's marijuana plants have a higher ratio of THC, compared to CBD, a chemical that may have potential medicinal qualities, de la Monte said. THC has been linked to negative health effects such as the increased risk of losing touch with reality, she said.