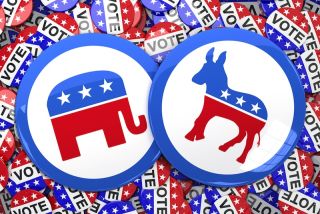 Call it a presidential game of 20 questions: The 2016 U.S. presidential candidates recently answered a slew of questions about science-related issues, offering a glimpse of their stances on everything from vaccinations to climate change to the country's growing opioid problem.

ScienceDebate, a coalition of 56 leading U.S. nonpartisan organizations representing more than 10 million scientists and engineers, called on the candidates to give their stance on top science, engineering, technology, health and environmental questions facing the country.

Climate change, in particular, was a hot-button issue.

Clinton said the science of climate change is "crystal clear" and the issue is "an urgent threat and a defining challenge of our time." The Democratic candidate outlined her plan to address the issue, which focused on making America "the clean-energy superpower of the 21st century."

A growing body of scientific evidence confirms that human activities are contributing to rapid climate change, and scientists have warned that if the gradual heating of the Earth does not slow, the repercussions could be devastating. Recent data from NASA suggest that 2016 is on track to be the hottest year on record. In fact, 16 of the hottest years on record fall within the past two decades, according to the National Oceanic and Atmospheric Administration (NOAA). Melting ice sheets, rising global sea levels, collapsing ecosystems and an increased risk of extreme weather are some of the consequences of global warming, scientists have said.

For Trump, the issue of climate change was referred to in quotation marks. He said, "There is still much that needs to be investigated in the field." While the candidate noted the need for new energy sources to alleviate America's dependence on fossil fuels, he did not directly respond to how he would tackle the issue of climate change if elected. Instead, Trump offered alternative uses for the country's limited financial resources, such as increasing food production or fighting malaria. [We Fact-Checked the Science Behind the Republican Party Platform]

On the topic of opioids, ScienceDebate asked candidates how they would enlist researchers, medical doctors and pharmaceutical companies in addressing this issue. Powerful prescription painkillers — like hydrocodone (marketed as Vicodin), oxycodone (OxyContin, Percocet), morphine (Kadian, Avinza) and codeine — are highly addictive and dangerous with misuse.

Trump's solution to the growing prescription drug problem was to "stop the inflow of opioids into the United States," something he said his administration can and will do.

In Clinton's response, she noted that 52 million Americans over age 12 have misused prescription drugs. Clinton said the government must work with medical professionals to treat the issue on the ground, from how patients access the medications to how they are supported in recovery. Beyond opioids, Clinton discussed the need to combat all drug and alcohol addiction. She described a proposed $10 billion initiative that would support prevention, treatment, recovery and other areas of reform.

Beyond the science issues, the candidates also varied in the format of their responses. In general, Trump questioned the need for the federal government's involvement in a number of scientific issues, such as agriculture and ocean health. His answers were also short and took a broader approach in addressing the questions.

For instance, in response to the last question on scientific integrity — in which ScienceDebate asked candidates how they will ensure scientific evidence is transparent and free from political biases and pressure — Trump said:

"Science is science and facts are facts. My administration will ensure that there will be total transparency and accountability without political bias. The American people deserve this and I will make sure this is the culture of my administration." [6 Politicians Who Got the Science Wrong]

In contrast, Clinton was very detailed in her responses and outlined not only the role of the government but also specific plans for her presidency. To the same scientific integrity question, Clinton explained how her efforts would "ensure a culture of scientific integrity," which included the facilitation of open communication and public engagement. Clinton also discussed her concern over the interference of partisan political efforts in scientific endeavors and called for "the free exchange of ideas and data" and federal policies to reinforce public trust in the integrity of science.

One issue the candidates all agreed on was the need to expand the space program, including the importance of exploration and its inspirational aspects. Trump noted that a strong space program inspires students to pursue the so-called STEM fields (science, technology, engineering and mathematics), while Clinton shared her personal awe of space and commended NASA's efforts thus far. Green Party candidate Jill Stein called for demilitarized and internationally collaborative space exploration.

Libertarian Party nominee Gary Johnson had not yet responded at the time of publication.

The candidates' full answers to all 20 questions can be found on the ScienceDebate website.