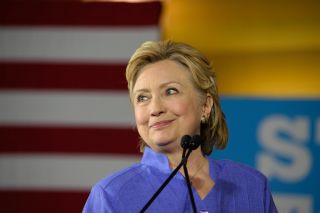 Hillary Clinton's doctor diagnosed the presidential candidate with pneumonia on Friday, according to The New York Times.

But while the illness may evoke images of cold weather, experts told Live Science that a late summer case of pneumonia is nothing surprising.

Pneumonia, which is characterized by inflammation in the lungs, can be caused by bacteria, a virus or a combination of both, said Dr. Amesh Adalja, an infectious-disease specialist and a senior associate at the University of Pittsburgh Medical Center's Center for Health Security. Adalja has not treated Clinton. [7 Absolutely Horrible Head Infections]

There is some seasonality to many infectious diseases, Adalja told Live Science. For example, certain viruses which can cause pneumonia are more common in summer than they are in winter, Adalja said. Pneumonia can be caused by a number of other things, including fungal infections, parasites or reactions to certain medications.

With any disease, seasonality represents only one common pattern of infection. That means it is possible for a person to get a certain illness outside of that season, he added.

Dr. Len Horovitz, a pulmonologist at Lenox Hill Hospital in New York City, who has not treated Clinton, agreed. Just like there are winter colds and summer colds, caused by different viruses, a person can get pneumonia in the summer or the winter.

Although The New York Times reported that Clinton is currently taking antibiotics for the pneumonia, Horovitz said that he suspected the candidate's pneumonia was caused by a virus, rather than bacteria. Antibiotics would not treat a viral infection, he said.

Still, it's not uncommon for a doctor to start a patient on oral antibiotics, especially when the patient has walking pneumonia, Horovitz said, referring to the type of pneumonia that involves not being stuck in bed. Doctors prescribe antibiotics in case a patient does turn out to have a bacterial infection. Although such infections can be confirmed by testing a person's sputum (a mixture of saliva and mucus) for bacteria that could cause pneumonia, it can take several days for the test results to come back, and by then, a person could be quite ill, he said.

Walking pneumonia is very common, Horovitz said. He noted that in his practice, he sees it all the time.

Because the illness is not serious, doctors don't need to report it to the Centers for Disease Control and Prevention (CDC), Horovitz said. When the CDC talks about the nation's pneumonia cases and statistics, they're talking about the more serious cases that require a person to be hospitalized, he said.

"There's no obligation to report walking pneumonia [to the health department] any more than you'd have to report a common cold," Horovitz said. The condition is about as contagious as a cold, he added.

The treatment for a viral version of pneumonia includes staying hydrated, getting rid of mucus from the throat and lungs (by coughing it up, for example) and getting enough sleep, he said.