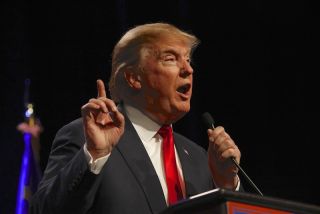 With less than a month to go before Iowa's Republican primary caucus, Donald Trump remains atop the presidential candidate polls. His popularity appears unblemished despite brash statements, personal insults thrown at his opponents and rampant speculation over his perceived narcissistic tendencies.

Trump surely displays enormous self-regard; in June, for example, he boasted that he'd be "the greatest jobs president that God has ever created." In September, he promised, "We will have so much winning if I get elected that you may get bored with winning." Egoism is a trait Trump seems proud of, in fact. In 2013, he wrote in a Facebook post, "Show me someone without an ego, and I'll show you a loser — having a healthy ego, or high opinion of yourself, is a real positive in life!"

While Trump's ego is extreme, he may be a bellwether for politicians as a whole — and for the American public. Research suggests that both the political class and ordinary people are becoming more self-absorbed. And this increase in narcissism may have implications for many elections to come.  [The 5 Strangest Presidential Elections in US History]

Narcissism is an ingredient in what psychologists call the "dark triad," three traits that are linked to callousness and manipulative behavior (the other two are Machiavellianism and psychopathy). When narcissism becomes extreme, it can qualify a person for narcissistic personality disorder. This condition is marked by impairments in functioning due to exaggerated self-image, lack of empathy and trouble forming deep relationships. A person with the disorder will also hold feelings of entitlement and grandiosity, and will crave attention. [The 10 Most Controversial Psychiatric Disorders]

Though some people with narcissistic traits may be covering up deep insecurity, most narcissistic people believe their own hype, said Jean Twenge, a psychologist at San Diego State University and author of "The Narcissism Epidemic: Living in the Age of Entitlement" (Atria Books, 2010).

Some research suggests that politicians are more likely than most to admire their own awesomeness. In one study, published in the journal Current Psychology in 1998, scientists compared the narcissism scores of university faculty members, clergy members, librarians and politicians and found that politicians were significantly more narcissistic than the rest.

More recently, researchers rated the narcissism levels of every president up to and including George W. Bush, basing the ratings on the opinions of expert historians and biographers. That research, published in December 2013 in the journal Psychological Science, revealed that presidents are more narcissistic than the general population. Specifically, the researchers reported, presidents are high in what is called "grandiose narcissism," the common version of narcissism marked by supreme self-confidence and imperviousness to criticism.

It makes sense that the people drawn to politics would be supremely self-confident and able to brush off the criticism sure to come their way. But the 2013 study showed something else: Presidents have been getting more narcissistic over time. And in that sense, Trump may just be the logical conclusion of an ongoing trend.

A society of narcissists?

Twenge and her colleagues have found that narcissism is on the rise in the United States, a conclusion based on large surveys in which people answer questions about their self-regard and expectations out of life. This work is not without controversy, but Twenge argues that the survey's findings mesh with evidence of rising narcissism as found in other domains: people's increased belief in their own uniqueness, the rise in plastic surgery (greater than what would be expected from affordability alone), individualistic language in books and song lyrics, increasing desire for fame, and even increasingly unique baby names.

To the extent that the general public is becoming more self-involved, politicians might be increasingly ego-driven, as well. But presidential races are their own breeding grounds for narcissism, above and beyond any cultural self-absorption. Round-the-clock media scrutiny and social media mudslinging likely dissuade the nonegotistical from even running, said Ashley Watts, a doctoral student at Emory University in Atlanta and an author of the 2013 study on presidential narcissism.

"I think presidents [now] are more susceptible to media and public scrutiny," Watts told Live Science. "We're maybe selecting out the kind of people who can't handle that kind of scrutiny."

She warned, however, that with only 42 data points, it's hard to draw firm conclusions about presidential egos over time.

Celebrities, like politicians, score higher in narcissism than does the general public, Twenge noted.

"Any role that involves public performance tends to involve people higher in narcissism on average," she said.

In general, Twenge said, narcissism is becoming more acceptable to Americans than in previous generations, whether or not you dispute the claim that self-absorption is on the rise. [7 Personality Features That Are Bad for You]

"When our studies on narcissism came out, an extremely common reaction was, 'But isn't that good? Don't people need to be narcissistic and self-centered to succeed?'" she said.

Watts and her colleagues found that narcissism was linked with performance, at least in presidents. The more narcissistic the president, the more likely he was to excel in crisis management, agenda setting and public persuasiveness. In other words, narcissism has its upsides.

In general, narcissism appears to help people rise to the top, but narcissism isn't linked with long-term leadership success, found a 2015 review of research published in the journal Personnel Psychology. In one of the reviewed studies, researchers assigned strangers to groups that met over a 12-week period. Narcissistic tendencies predicted who would take on leadership roles in the groups at first, but not later, the researchers reported in the journal Personality and Individual Differences in January 2015.

"Despite enjoying a honeymoon period of leadership, the appeal and attractiveness of the narcissistic leader rapidly wane," the researchers wrote.

Thus, while an ego like Trump's may charm, narcissists' long-term leadership capabilities are more questionable.

"As politics becomes more of a public performance, it draws people higher in narcissism," Twenge said. "So we will end up with more politicians who are charismatic and confident and who we like in the short term, but more who disappoint us in the long run."