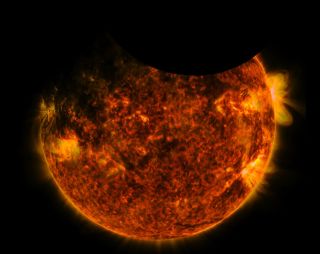 NASA's Solar Dynamics Observatory witnesses the moon and the Earth passing across the face of the sun simultaneously on Sept. 1, 2016. Because Earth's atmosphere absorbs some of the sun's light, our planet's shadow is fuzzy, while the moon's is sharp and distinct.
(Image: © NASA/SDO)

A NASA satellite captured a far-out view last week when the moon and the Earth passed in front of the sun simultaneously.

The double eclipse was captured by the Solar Dynamics Observatory (SDO), a satellite designed to monitor the sun and its atmosphere. The spacecraft holds a variety of instruments to image the sun in 13 wavelengths, enabling researchers to better understand solar cycles.

The SDO is in geosynchronous orbit above a ground station in New Mexico, to which the satellite transmits its data. Its orbit is designed to have as clear a view of the sun as possible. Twice a year, however, the satellite experiences periods of daily eclipses as the Earth passes between the craft and the sun. These "eclipse seasons" last for a few weeks, according to NASA, and can obstruct the satellite's view for up to 72 minutes a day. [Solar Eclipses: An Observer's Guide (Infographic)]

On Sept. 1, one of these daily Earth eclipses happened to coincide with the moon's transit across the sun. The satellite captured imagery of the Earth blocking the sun's light, and as the planet clears the sun, the moon can be seen lagging slightly behind.

Earth's edge is blurry in the images because the planet's atmosphere absorbs light, according to NASA. The moon has no atmosphere, so its edge appears sharp against the surface of the sun.

Some Earthlings got a cosmic view out of this transit, too. In Africa — particularly South Africa — the moon passing in front of the sun created an annular eclipse. An annular eclipse happens when the moon passes between the Earth and the sun, but at the outer reaches of the natural satellite's orbit. Thus, the moon appears too small to entirely cover the surface of the sun.

The result is a "ring of fire" effect, in which the sun is partially covered but light shines from the star's edges. This bright ring is called an annulus. On social media, people across central and southern Africa shared photos of the annular eclipse on Sept. 1, many of which were rounded up by the Mail & Guardian newspaper.