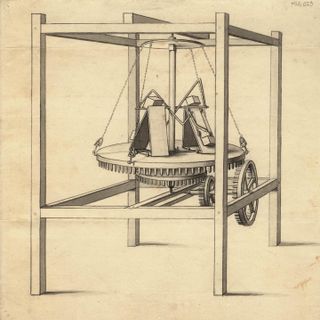 Almost as soon as humans created machines, they attempted to make "perpetual motion machines" that work on their own and that work forever. However, the devices never have and likely never will work as their inventors hoped.

"In short, perpetual motion is impossible because of what we know about the geometry of the universe," said Donald Simanek, a former physics professor at Lock Haven University of Pennsylvania and creator of The Museum of Unworkable Devices. "Nature provides no examples of perpetual motion above the atomic level."

Still, the inviolability of the laws of physics has not stopped the curious from ignoring them or trying to break them. According to Simanek's online museum, the first documented perpetual motion machines included a wheel created by Indian author Bhaskara in the 12th century. It supposedly kept spinning due to an imbalance created by containers of mercury around its rim. Other attempts include a 16th-century windmill, 17th-century siphons, and several water mills.

While most perpetual motion attempts have been in the spirit of scientific inquiry, others have aimed to deceive and make money. The most famous perpetual motion hoax was devised by Charles Redheffer in 1812.

An age of wonders and mischief

Redheffer's perpetual motion machine enthralled the Philadelphia and New York communities and brought in thousands of dollars. It was debunked twice by engineers, which ultimately led to Redheffer being run out of town, according to "Perpetual Motion: The History of an Obsession" (Adventures Unlimited, 2015) by Arthur W.J.D. Ord-Hume.

Nineteenth-century America was a prime time for hoaxes. According to Kimbrew McLeod, author of "Pranksters: Making Mischief in the Modern World" (NYU Press, 2014), the Age of Enlightenment's focus on science, learning and gaining knowledge through personal experience and observation led increasing numbers of people to seek out phenomena that they could judge for themselves. Additionally, increasing literacy rates meant that more people were familiar with concepts like perpetual motion and were eager to see a machine that achieved it.

But, as Barbara Franco wrote in "The Cardiff Giant: A Hundred Year Old Hoax," "people were interested in the new sciences without really understanding them … The nineteenth century public often failed to make a distinction between popular and serious studies of subjects. They heard lectures, attended theaters, went to curiosity museums, the circus and revival meetings with much the same enthusiasm."

Amy Reading, author of "The Mark Inside: A Big Swindle, a Cunning Revenge, and a Small History of the Big Con" (Vintage, 2013), notes a peculiar characteristic in the American sense of fun. People seem to enjoy being taken in by a story that they know might be untrue, falling for it anyway and then being surprised upon learning they were duped. That Redheffer was actually run out of town suggests that early 1800s audiences perhaps hadn't yet fully embraced that form of entertainment, though they would in subsequent decades.

Historians do not know Redheffer's background prior to the hoax, according to Ord-Hume. He appeared on the scene in 1812 when he opened a house near the Schuylkill River for public viewing. Inside was a machine he claimed could keep moving forever without ever being touched or otherwise aided.

Redheffer's machine was based on an "assumed 'principle' of perpetual motion that assumes continual downward force on an inclined plane can produce a continual horizontal force component," said Simanek. The machine had a gravity-driven pendulum with a large horizontal gear on the bottom, according to Ord-Hume. Another, smaller gear interlocked with the larger one. Both the large gear and the shaft were able to rotate separately. Placed on the gear were two ramps, and on the ramps were weights. The weights were supposed to push the large gear away from the shaft, and the friction would cause the shaft and gear to spin. The spinning gear would, in turn, power the interlocked smaller gear. If the weights were removed, the machine stopped.

According to the Visual Education Project, sources differ on the amount Redheffer charged unsuspecting Philadelphians to see his machine. Some say he charged $5, others say he charged $1, and others say women were let in free or for $1. Regardless, the price did not deter the fascinated public, and the machine became a sensation. Bets up to $10,000 were placed on its authenticity.

Redheffer was so pleased with his machine and its reception that he lobbied the state of Pennsylvania for funds to build a larger one. On January 21, 1813, the state sent inspectors to investigate before doling out the money. It was then that Redheffer's scheme fell apart.

According to Ord-Hume, upon arrival, the inspectors saw that the machine was in a room with a locked door and missing key. They could only view it through a window. One of the inspectors, Nathan Sellers, had brought along his son, Coleman. Young Coleman noticed that the gears in the machine were not working the way Redheffer claimed they did. The cogs in the gears were worn on the wrong side. This meant that weights, shaft, and gear were not powering the smaller gear to the side; the smaller gear was powering the larger device.

Nathan Sellers believed his son and determined that the machine was a hoax. Rather than confront Redheffer, however, he hired Isaiah Lukens, a local engineer, to build his own perpetual motion machine, which would look and "work" the same way Redheffer's did, according to Ord-Hume. Lukens constructed a machine that looked like Redheffer's but had a seemingly solid baseboard and a square piece of glass at the top. Four wooden finials, supposedly decorative, were on top of the glass and attached to the wooden posts. Lukens placed a clockwork motor in the baseboard. One of the finials was, in fact, a winder. It could be wound and power the motor all day. The motor would turn the shaft, which would power the gears.

Sellers and Lukens showed their machine to Redheffer, who was overcome at seeing his fake machine seemingly work for real, according to the University of Houston's website The Engines of Our Ingenuity. He offered them money to know how it was done. Sellers and Lukens did not denounce him on the spot but rather let news of the hoax spread throughout the Philadelphia.

Though Philadelphia was on to Redheffer, the era's slow communication speeds meant that New York was still a target. Redheffer set up his machine again. Again, he drew large crowds. Among the onlookers was Robert Fulton, an engineer best known for developing the first successful commercial steamboat. Ord-Hume writes that when Fulton saw the machine, he exclaimed, "Why, this is a crank motion!"

Fulton had noticed that the speed of the machine and the sound it made were uneven, as would be the case if it were being cranked by hand. Some reports state that the machine also wobbled slightly. According to Ord-Hume, Fulton accused Redheffer, who blustered and proclaimed that his machine was real.

Fulton made an offer: Redheffer would let him try to expose the real source of the machine's energy, and if he could not, he would pay for any damage caused in the attempt. Redheffer agreed — likely under pressure from the crowd of visitors — and Fulton began prying off boards from the wall next to the machine, revealing a catgut cord. The cord ran through the wall to the upper floor. Fulton hurried upstairs, where he found an old man sitting on a chair, turning a crank with one hand and eating a crust of bread with the other.

Realizing they had been duped, the crowd of spectators destroyed the machine on the spot. Redheffer fled the city immediately.

Little is known about Redheffer post-hoax. According to "Citizen Spectator: Art, Illusion, and Visual Perception in Early National America" (University of North Carolina Press, 2011) by Wendy Bellion, he constructed another machine in 1816 but did not let anyone see it. He was granted a patent for it in 1820, but nothing is known about the device or what became of Redheffer. The patent itself was lost in a fire.

The "impossibility" of perpetual motion

Redheffer's hoax is history's most famous perpetual motion attempt but it is far from the only one. Most, however, were not designed to swindle the public out of their money.

Why do people continue to attempt perpetual motion machines when all laws of physics suggest they are impossible?

"My hunch is that they are motivated by their incomplete understanding of physics," Simanek told Live Science. "The perpetual motion machine inventors' view of physics is a collection of unrelated equations for specific purposes. They fail to grasp the greatest strength of physics — its logical unity.

"For example, the laws of thermodynamics do not arise by fiat. They are derivable from Newton's laws and the kinetic model of gases and have been well-tested experimentally … You can't simply discard one law you 'don't like' without bringing the whole logical structure of physics crashing down."

Simanek noted that most perpetual motion machine inventors do not believe their machines violate the laws of physics. "Some suppose that certain specific laws do not apply, usually conservation of energy and the laws of thermodynamics."

"Could there be some place where the geometry (and the physics) are different?" Simanek said. "Maybe, but we have no clue where to find that place, and one might wonder whether we could even go there, or exploit it for our purposes … That's armchair speculation, and science-fiction, not science."

If a perpetual motion machine did work, it would need to have certain traits. It would be "frictionless and perfectly silent in operation. It would give off no heat due to its operation, and would not emit any radiation of any kind, for that would be a loss of energy," said Simanek. Even so, such a machine would not run forever because "due to its rotation, its parts would be continually accelerating, and we know that matter is made up of charged particles, and accelerating charges radiate away energy." This would cause changes to the machine, making it eventually slow or stop.

Still, "if a machine could spin a wheel at constant speed for a very long time, with no measurable diminution of speed, and with absolutely no input energy, we could consider it, for all practical purposes, to be perpetual motion … But it would be only a useless curiosity, for if we tried to extract work from it, it would soon slow to a stop," Simanek said.

Most inventors of perpetual motion machines have a different goal in mind. "They want 'over-unity' performance — a machine that puts out more useful work than its energy input," said Simanek. Then, you would have energy left over for use.

Other than swindling the public, this might have been Redheffer's ultimate goal. Even after the hoax was revealed, Philadelphia newspapers speculated that the city had missed its chance to operate water pumps for free, according to The Engines of Our Ingenuity. And Redheffer's 1820 patent was for "machinery for the purpose of gaining power," according to the Visual Education Project. But those were wishes rather than realities.