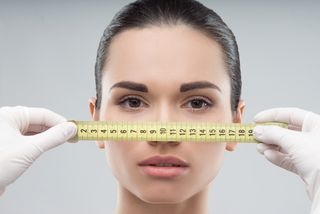 Do you have your mom's tiny nose? Uncle Jerry's wide-set eyes? Family resemblance is easy to notice but, as it turns out, not so easy to understand in terms of genetics.

But in a new study, researchers tried to make sense of how a person's genes are linked to his or her appearance.

"We know from twin studies, for example, that some parts of the face seem to have a very strong genetic component," said Seth Weinberg, an assistant professor of oral biology at the University of Pittsburgh and an author of the study, which was published today (Aug. 25) in the journal PLOS Genetics. "However, very little is known about the specific genes involved in determining differences in the size and shape of various facial features in humans." [Genetics By the Numbers: 10 Tantalizing Tales]

In an attempt to unravel the genetic mysteries of our mugs, the researchers took 3D images of more than 3,100 individuals and looked for associations between their facial features and nearly 1 million genetic variations from across the human genome.

The researchers included 20 different facial measurements in the study, such as face width and nose depth. In addition, each face was captured using a technique called digital stereophotogrammetry, which uses two-dimensional images taken from different angles to create detailed 3D images. The researchers also took saliva samples to test each person's DNA.

There were a total of seven regions of the genome that were linked with these five facial measurements (some measurements were linked with more than one genome region), and each region contains more than one gene, so it's still unclear which specific genes relate to which features, according to the study. However, some of the regions contain genes that have been previously linked to genetic syndromes that affect the face or facial development.

The findings add to a very small number of studies that have attempted to look at the genetics of facial features in such a comprehensive way, Weinberg told Live Science. In addition to identifying several new associations between genome regions and specific features, the researchers were also able to replicate previous findings, particularly those involving measurements of the nose, Weinberg said.

This genetic knowledge could have practical applications in the future, particularly when it comes to facial birth defects and syndromes. [Smile Secrets: 5 Things Your Grin Says About You]

"It may be the case that even slight changes in the way these genes function can alter how a person’s facial features develop," Weinberg said.

For example, research like this could offer insights into the causes of conditions such as cleft lip or cleft palate, the researchers wrote. These are among the most common of all birth defects. They occur because of an error in how a fetus's face develops in the womb: during normal development, different parts of the face form separately and then join together. If they don't join together properly, a baby is born with a cleft lip or palate.

There's still a lot to learn about the relationships between genes and facial features, but the current research is promising, Weinberg said. It's likely that most genes that affect facial features have only very small effects on the face, so further research will have to include even more detailed measurements and a large number of faces in order to hone in what each gene does, he said.