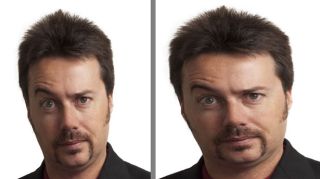 Would you trust this guy? How about this guy?
(Image: © LiveScience photo illustration; Dreamstime)

A man's face might hint whether he is bad to the bone, with scientists finding that wider faces might predict unethical behavior in men.

Wide faces in men have been linked with aggression and perceptions of untrustworthiness. Now researchers have discovered that broad-faced men appear more likely to deceive their counterparts in negotiations and are more willing to cheat in order to increase their financial gain.

In one study, researchers analyzed how willing people were to lie. They measured the facial width-to-height ratio of 192 Masters of Business Administration students, 115 of whom were men. Next, they randomly assigned the volunteers to play either buyers or sellers role in negotiations over emails as part of a classroom exercise. Sellers were instructed not to sell a property unless they were certain it would not be used commercially, while buyers were instructed that they would certainly develop the property commercially if they bought it.

The scientists found men with broader faces were approximately three times as likely to lie in the negotiation than narrower-faced men. Facial width was not linked to either deception or trustworthiness in women. [How to Tell if a Man Is Trustworthy]

In another study, the researchers analyzed how willing volunteers were to cheat. They had 103 college students enrolled in a business ethics class, 50 of whom were men, each roll a pair of dice to see how many times they would be entered into a lottery. The participants all had the chance to lie about their dice roll to increase their chances of winning. The scientists not only measured facial width but also surveyed how powerful the volunteers generally felt, asking how much they agreed on a seven-point scale to eight statements such as "I can get people to listen to what I say" and "I think I have a great deal of power."

Men with broader faces overstated their dice rolls by an estimated 18.6 percent, while narrow-faced men overstated their rolls by less than 2 percent, said researcher Michael Haselhuhn, a management scholar at the University of Wisconsin-Milwaukee. Men with wider faces apparently felt more powerful in life than narrower-faced men, and the researchers noted that past research shows feelings of power are linked with less ethical behavior.

The scientists cautioned the public to not take such findings to extremes.

"Are we advocating for the active discrimination of men born with relatively wider faces?" Haselhuhn said. "Our answer, of course, is 'no.' While our findings provide compelling evidence that men's facial structure is a reliable physical cue of the likelihood of engaging in ethically questionable behavior, we stress that it is but one of many factors that affect unethical judgment and action."

For instance, Haselhuhn emphasized that while they found wide-faced men were three times more likely to deceive their counterparts than narrower-faced men, "the majority — 60 percent — of men with relatively wide faces did not engage in deceptive behavior."

"We caution individuals to not consider men's facial structure to the exclusion of all factors," he told LiveScience. "Ethics research has shown that even small situational factors, such as whether it is light or dark in a room, can have a major impact on ethical judgment. In our studies, we controlled the environment to a large extent, and men were able to lie and cheat nearly anonymously; in other settings, where either men are held accountable for their actions, or when they find themselves in an organization that cultivates an honest work environment, the effects of men's facial structure will likely be mitigated to a certain degree." [History of Human Aggression]

Also, the researchers noted men with broad faces are not all bad. "In other research, we have found that the facial structure of Fortune 500 CEOs predicts firm financial performance, such that CEOs with relatively wider faces achieve greater financial success for their firm," Haselhuhn noted. "We believe that men's facial structure should be used as one important cue in detecting liars and cheaters, but caution should be taken in automatically labeling relatively wide-faced men as bad seeds."

The scientists detailed their findings online July 6 in the Proceedings of the Royal Society B.