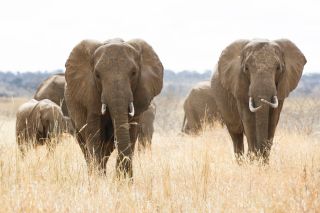 Villagers would use spears to move the elephants out of the crop fields, injuring and potentially killing the animals.
(Image: © The Nature Conservancy)

Conservationists are filling condoms with chili powder and firecrackers … to keep elephants away.

This scare tactic, part of a multistep alarm system, has been developed to protect farmland and villages from elephants, without harming the animals. Honeyguide Foundation, with support from The Nature Conservancy, has been training villagers to use the alarm system, and though unconventional, the chili condoms have already shown promise.

In northern Tanzania, the area around Tarangire National Park where elephants live has seen substantial civilization growth since the park was established in 1970. According to Matthew Brown, Africa region conservation director for The Nature Conservancy, the population density has more than doubled and much of the grasslands surrounding the park are being converted to farmland. [Elephant Images: The Biggest Beasts on Land]

"The issue is [the elephants] leave some of these parks, like Tarangire National Park, and go into these community areas that are farmed," Brown told Live Science. "It's not an ivory issue, it's human-wildlife conflict around a response, because they're raiding the crops."

Before the program started in October 2013, villagers would use spears to move the elephants out of the crop fields, injuring and potentially killing the animals. Even so, the elephants were damaging up to 70 percent of crops in the area. This led Damian Bell, executive director of Honeyguide, to research alternative options for keeping the elephants away.

Bell had heard that some communities found success with firecrackers, the loud noise scaring the elephants and prompting the animals to move. Communities had also used bright lights — from headlights on a vehicle or flashlights — to push the elephants away.

In addition, for years, farmers have used chilies — planting peppers as a "fence" or dispersing powder — to ward off the elephants. As very few animals like chili, the peppers (or powder) have also been used to keep other animals, like monkeys, from crops.

"I thought, 'Let's mix these together — let's have a firecracker that's wrapped up in chili. So that when we chuck it at them, there's a bang and there's the smoke,'" Bell told Live Science. "So we started working on the chili bomb, chili cloud kind of thing, and that was working well."

The so-called chili bombs are a mixture of chili powder and soil, packed with a firecracker, into a condom. Brown said in order for the chili bomb to work, it needed to be in a balloon that could expand to the shape of the firecracker and would burst from the firecracker's fuse. Condoms are also readily available at local markets, making for the perfect container.

However, while the chili bombs were succuessful in one community, and the use of bright flashlights worked in another, no single tactic saw complete success.

"So I thought, 'Let's work on the senses, the eyes, the ears and the nose, the smell,'" Bell said of developing a four-step system.

In order to attack four of the animals' senses, while also escalating each tactic in order to create a complete alarm system, Honeyguide trained villagers to use a multipronged approach. First the bright flashlight, which Bell said has a 60 percent success rate in turning the elephants around. A loud horn is used next to encourage the remaining 40 percent of elephants to move. If that still doesn't work, then the chili powder and firecracker condom "bombs" are thrown.

Finally, in a few cases in which the elephant still has not budged, a Roman candle firework is thrown. Though the firework is very effective, it's expense and intensity make it the last effort to move the animals.

"The Roman candle is something that is quite intense. It has lots of bangs, lots of flashes, lots of light. That Roman candle is 99.9 percent effective, and we've only used it nine times by June," Bell said, referring to the tactics used this crop season, from November to July. "So the chili bombs we've used a lot, the flashlights and horns uncountable times."

Despite bad weather and low rainfall this growing season, Bell said farmers expect this to be their most successful harvest year, because they lost so little of their crops to wildlife.

Conservationist Tim Davenport, who is not involved in the alarm-system project, said this particular technique is noteworthy in that it uses elephants' intelligence and trains them over time.

"Elephants are pretty smart, and that's why this sort of tactic is an interesting one," Davenport, who is the country director for the Wildlife Conservation Society in Tanzania, told Live Science. "The real aim here is to almost sensitize the elephants not so much to the chili but to a flashlight first."

In human-wildlife conflict management, Davenport said, it is as much about the animals' behavior as it is the humans'. As the elephants become conditioned to respond to the flashlight, because they learn that what comes after the light is worse, the villagers are also learning to relate to the elephants differently.

As the villagers become more confident that they can move an elephant off their land in a non-harmful manner, Brown said they no longer see the need in killing in the animals. The project's collaborative effort with park rangers has also changed the communities' behavior toward rangers.

"The community are now seeing the rangers as providing support and are in frequent communication with them," Brown said. "Meaning they are now more likely to provide information on any possible poaching activity."